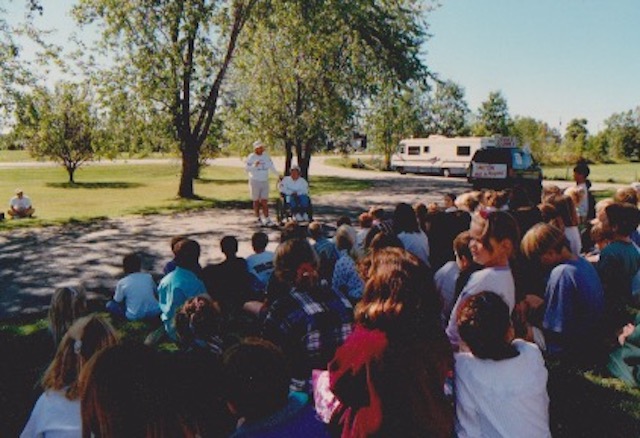 It’s a very cool and almost cold morning. There seems to be a different kind of light that comes with a very blue sky. We meet our police escort at our start point and head up Highway 29, which is not a very good road. It has very little shoulder and traffic is sometimes passing us very close.

When the sun gets up a little higher, it turns into a beautiful fall day.

With the little mental lapses I have been having, I forgot to call Peter Garland at AM980 in London. I ran up to the van and got through to him at about 10 to 10, much later than I should have called.

We had a hot dog lunch and I fell asleep on the motor home. We managed to complete 23 kilometres by late afternoon after a day of slow pushing along the road.

We marked the road so we could find our start point in the morning and then moved up to the Mariner Motel in Smith Falls. We ordered pizza for dinner and while Jesse and some of the volunteers watched the movie “Blue Lagoon,” Sean and I went out to look at a gift shop and I bought some coat hooks. For me, this is a big shopping excursion.

We talked to Ron Calhoun today about distances as we get closer to Ottawa. Monday is listed as 39 kilometres. There is no way I can do that. I am now working hard to make 25 kilometres on most days. The good news is that we now have only five days left.

Several of our volunteers have been cautioning me about being prepared for everyone wanting some of our time when we get home. First, Jesse and I both want some time to rest.
On the radio this morning, I told Peter Garland how we’ve become quite a family on the road and how in a few days we will all be going our separate ways. It’s not going to be easy to do.

The other thing I forgot to mention is that we stopped at a public-school right on the highway at a little place called Frankville, outside of Smith Falls and about 225 kids (which was the entire school) applauded when we arrived.

Jesse spoke to the kids and told them about why we are on the road and the value of research. He shared some of our adventures and then the kids presented Jesse with a cheque for our cause. It was pretty neat. It was also the first time Jesse had talked to school kids this school year. Jesse is now a very competent public speaker and he does a good job at it. Jesse is 15 years old. Sometimes it seems like I left home with a 14-year-old and I’m going home with a 16-year-old. He’s really matured.