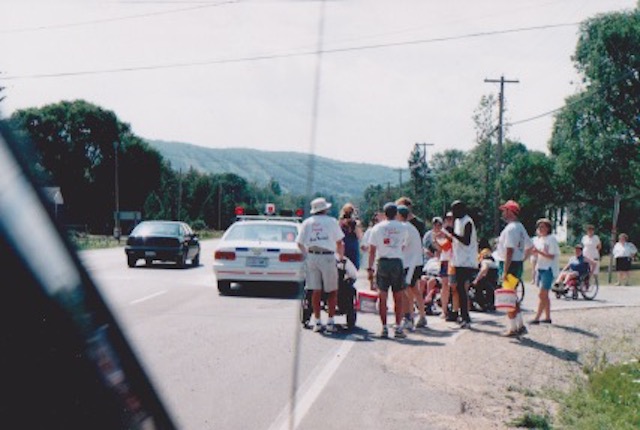 Our 118th day on the road started with a long drive to get to our start point where we finished yesterday. Once we were underway, it was a fairly long push to get to Brockville.  Jesse and I were with Debbie Marks, another of our tireless volunteers who has been with us in various parts of Ontario throughout the course of the summer.

I have no idea how we ended up on this topic, but we spent time along the road talking about marriage, getting married and the work that two people have to put into a marriage.  I told Debbie that getting married is easy. Staying married takes work and that staying married a long time should probably be considered a fine art.

Late in the morning Ron Schistad joined us and there was a lot of waving and honking along the road. At midday, CJOH from Ottawa came out to do a story just before we arrived in Brockville and we did some more radio interviews. In the afternoon, we made the turn heading north on Highway 29 toward Smith Falls. We are now on the road heading directly to Ottawa.

We finished the day with 24 kilometres completed and then headed back to our motel in Brockville for the night.  Bill Teams, one of our volunteers, told me just before supper that a man and woman from Russia had stopped at the motor home to make a donation and that the woman was in tears when Bill asked her if she would like to meet Jesse. She said she just couldn’t do it.  (Ed’s note:  My notes don’t tell me, and I can’t remember whether my friend Bevin Palmateer was with us or I spoke to him on the phone.)  At the end of the day, my friend Bevin Palmateer told me that we have had a terrific impact back in London. He says he hears about people spending so much more time giving their kids a hug. I didn’t get that message out here. Maybe I’ll understand that statement when we get back home.

The other thing that happened today was our OPP escort (Glenda) had to leave in a hurry for an accident. This hasn’t happened very often, although sometimes our escorts had to leave to go to court.  We were always given another officer and cruiser as escort when this happened.  We played a bunch of brain teasing puzzles while we waited for Glenda to come back. (We were never allowed to move along the highway without an escort behind us.)  After supper, we all watched Friends, The Simpsons and Seinfeld. We shared the laughter and some chocolate chip cookies that Debbie Marks brought from home. She made them. They were great.

All in all, knowing that no two days have ever been the same out here, this was a fairly calm and quiet day. We know things will be very busy in a few days as we close in on the finish line. Jesse seems very prepared for what will be happening ahead. He’s great. 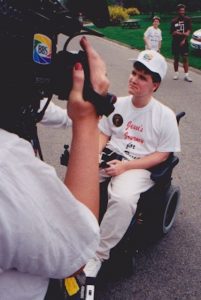