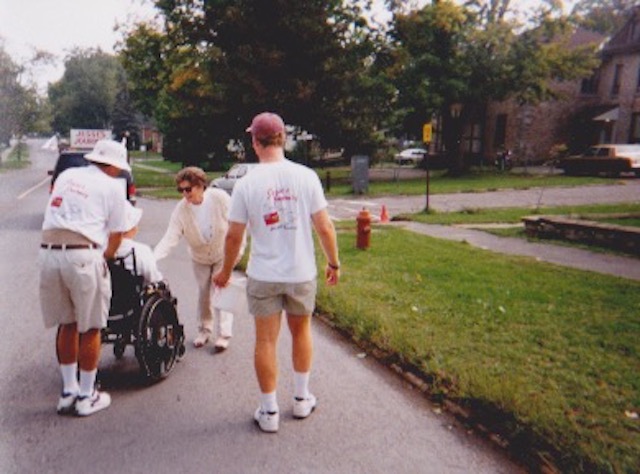 Another day with a very early start.

I’m glad there aren’t too many more of these left. After breakfast in Kingston, we head out to the highway to pick up where we left off yesterday on the road to Gananoque.

We made it to Gananoque by 11:30 and met the mayor, whose brother is the manager of Charterways Buses in London. Small world.

The town presented Jesse with a cheque and he added to his hat-pin collection. His hat is getting quite heavy.

We had lunch down near the waterfront and Jesse got his first look at the St. Lawrence River.

In the afternoon we pushed on to Brockville. Cameraman Ron Schistad has joined us, and I think he has put in a lot of kilometres on the road with Jesse and me. Ron and Debbie have certainly shown their dedication to our cause.

Sean is now back, and I think Jesse is happy to have him here again. We finished our day on the highway and then returned to Kingston. Jesse had a pretty good day, but I think he is ready to wrap things up and head for home. I know that Saunders Secondary School (Jesse’s high school) has a nice reception planned when Jesse gets home.

I can’t remember much else about the day other than the Police Chief in Gananoque giving Jesse his tie pin. And, when I talked to Sherene she told me that the picture of she and Jesse and myself ran in the Toronto Star, London Free Press and Kingston Whig Standard.

My friend Peter Quesnel (a Duchenne dad) called and told Sean that the workers at McCormack’s in London saw our video today. Peter told Sean there were “very few dry eyes.” It’s not what we intend, but we can’t account for people’s reactions to what we are doing. I just hope they keep in mind this project is a fundraiser. We need to do all we can to fund research because that is where the answers are for all those boys who are just like Jesse.

Less than a week to go. 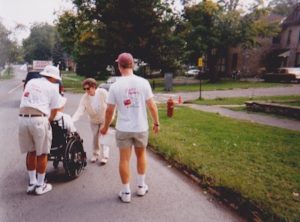 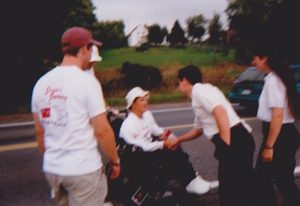