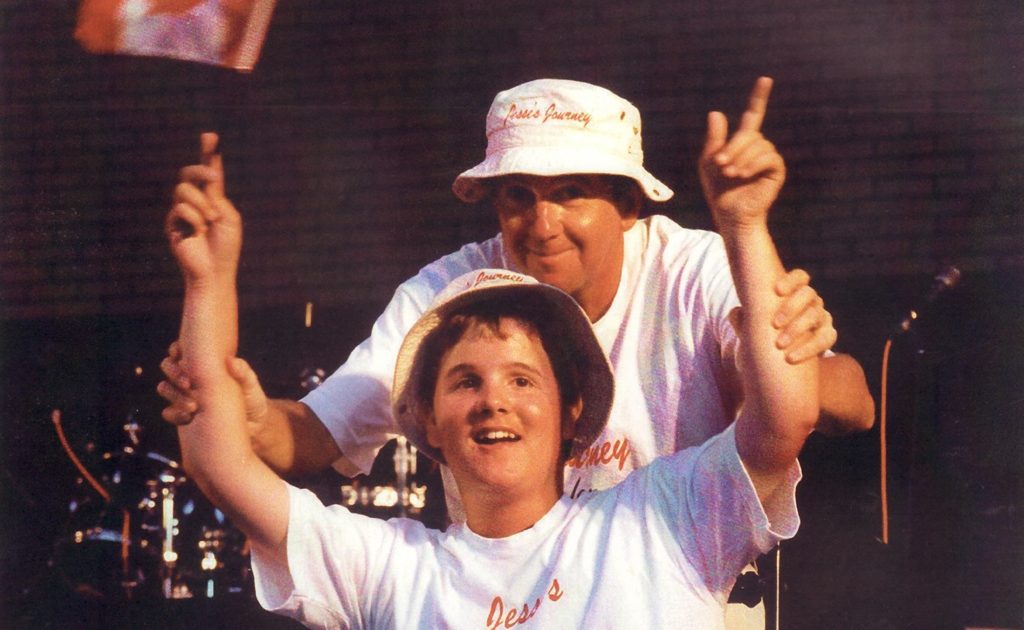 (Ed’s note: A little change of pace today. I am posting the day’s journal entry word-for-word as it appears in my logbook. Sorry I don’t know who some of the people are. Mostly I just knew people by their first name and often, I only knew them for a day.)

We start our day with a great breakfast at the Fireside Inn. After a couple of radio interviews we meet the OPP at Westbrook and I push Jesse into Kingston where things are pretty busy, and we are greeted by the mayor. Donna’s nephew Andy has joined us for the walk as well. We do some television stuff at noon with CKWS (live-to-tape double-ender) and One O’clock live with Bruce Williams.

In a little luck, the manager of a place called Stoney’s buys us lunch. The afternoon sees some pretty steep hills, more than I expected, as we head toward Gananoque. Things are pretty quiet, and my neck and legs are tiring by about 2:00 p.m. We call it a day after 22K – I’m sorry I couldn’t go any further. I hope this doesn’t become a problem. Jesse and I go with Trish to get our hair cut. We don’t look too bad if I say so myself. We meet the gang back at the hotel. The word is that CKWS ran six minutes of Jesse’s Journey including an interview with Chris May and shots of Sherene and I holding hands as I pushed Jesse into Kingston. Sherene went home with Glen after lunch and I will see her in Ottawa. I’m glad we won’t be apart very long.

Ron Calhoun and ‘Bagger’ arrived about 8:30 after some delays in Toronto etc. Ron brought a copy of the London Free Press with an article citing Jesse as the inspiration in more people signing up for the Terry Fox run. It makes me feel very proud. He’s an amazing kid who I think is having fun but who also wants to go home and get back to school. His dad also wants to go home as well. And so it goes with 8 days left.