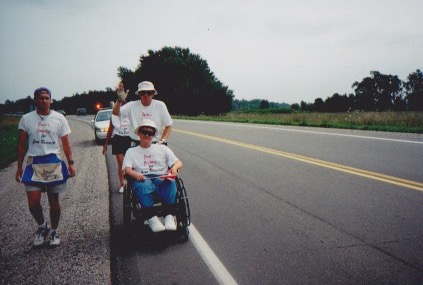 We set out from Belleville and continued heading east on Highway 2. It’s a Sunday morning and like most Sunday’s – it’s pretty quiet along the road when we are in the country.

Today, it’s also very windy and cold. I can tell that Jesse is missing Sean, who will rejoin us tomorrow. It seems like whenever I looked over, Sean was always there.

A kinesiology student at Western, Sean became a key part of our team right from day one. Sean has remarkable stamina. He looks after Jesse’s needs overnight and somehow he is always there with us on the road doing everything that needs to be done. And then a lot more.

Sean also looked after things like changing the tires on Jesse’s wheelchair (we went through six sets of tires.) The wheelchair was made of lightweight titanium and it arrived from St. Louis, Missouri, just three days before we left London. The hand breaks for the chair didn’t arrive until we were already on the road and had reached Thunder Bay. That meant I had to ‘drag back’ on the wheelchair whenever we were going downhill. There was a tether-line that attached to my belt and clipped to the back of the wheelchair so that if I fell, I went from being the ‘breaks’ to being the anchor that would stop the wheelchair from running away.

We are passed by lots of race car fans from London who are heading to the car track at Shannonville.

Arrangements had been made for Jesse and me to make an appearance at the track later in the day. We keep moving and end up passing the track and have to go back and then we were guests of Ford Motor Company at their tent where we had lunch and met lots of people.

Things are then running late when we get back on the road and push on to Napanee. The mayor is the only person there to meet us and I thought, good for him, that he took time away from his family on a Sunday to come and meet us when he only learned about Jesse’s Journey on Thursday.

When we headed back to our motel, I tried to rest while everyone else went out for supper. Sherene brought me a roast beef sandwich from Tim Hortons along with some soup, a hot cup of tea and a butter tart. Butter tarts are my favourite and I feel like I haven’t had one for weeks.

Tonight I’m fighting a headache and very sore muscles. Even my calves and biceps are sore. I think it’s muscle fatigue catching up with me. I hope I have enough left in the tank to reach the finish line.

Chris May has rejoined us on the road along with our good friend Bill Teams who has also rejoined the group as our motor home driver.

We have been without Sean for a few days as he is taking a short break. Jesse was wind burned today and he is anxious for Sean to be back. They have become very close to each other.

(Ed’s note: Jesse’s attendant Sean Bagshaw is now Dr. Sean Bagshaw. He and his wife Heather and their two children live in Edmonton.) 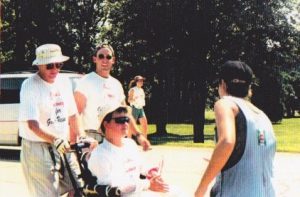 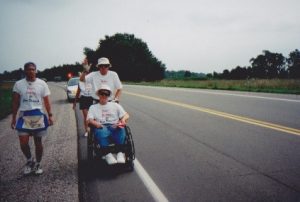