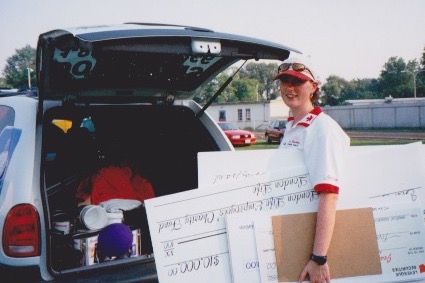 One more time we are up early to head to our start point east of Trenton and heading to Belleville.

John Lees from TV London, who I went to high school with at WCI in Woodstock is back with his daughters. John and his daughters Alene and Aislin (who somehow got the nickname The Leesburgers) have been a huge help whenever they have joined us. I think the first time they were with us was in Huntsville, which seems like a long time ago. I’m pretty sure these two hard working young girls are learning some lessons about what really matters in life.

By mid-morning, the road crew asks us to slow down a bit. This is something that hasn’t happened very often. We have made up lost time and we are actually a little ahead of schedule. This gives us more time to spend with people who have pulled to the roadside to make donations. Lots of them have cameras and Jesse and me, along with the road team are happy to pose for pictures.

After a stop at City Hall in Belleville for pictures, hats, tee-shirts (and more hat pins) we take a tour of the market garden and then have a nice lunch of soup and sandwiches in Victoria Park overlooking the Bay of Quinte.

It’s Trish’s birthday and we have a cake for her. Jesse gets to give Trish some flowers we got at the farmers market. Perry Esler gives Trish a cactus that he bought at the market and makes a fun speech about how Trish has been “a thorn in everybody’s side.”

Trish has had one of the hardest jobs on this project. A kinesiology student at the University of Western Ontario (now Western University), she joined our team just a few days before we left London on May 16th, heading for the Ontario-Manitoba border.

As Road Manager, Trish had to coordinate just about everything. While a lot of planning had gone into this project, what looks good on paper doesn’t always match the reality of being out there on the edge of the highway in all kinds of weather, with a volunteer crew that keeps changing.

Despite all the training I had done, in those first few days on the road we were pretty much making it up as we went, because none of us had any actual experience. Trish made sure that as quickly as possible, Jesse’s Journey, became a well-oiled machine that was running as smoothly as possible. Every morning she double-checked that food, water, signage (aka: blank cardboard cheques) and clean dry clothes were always ready in the escort van.

Trish handled her assignment with dedication and with class. It wasn’t always easy being second guessed by others. Trish had that unique ability to flex in a hurry on a job where no two days were ever the same.

And through all that, she remained a loyal and good friend to Jesse, always keeping his well-being in the front of her mind.

There’s a bit of a changing of the guard after lunch as Perry and Ron are heading back to London. Perry gives Jesse a big hug and says he has “two new heroes.” He is very kind.

We pushed on through the afternoon, making it past Shannonville before the next volunteers arrive – Ed Busko, a retired Bell worker from London and Sherene’s brother Glen joined us.

Dinner was at a place called the Golden Griddle (beef stew) and it was a nice surprise when a parts manager for General Motors bought dinner for the whole team. People are really good to us.

Then it was back to Howard Johnsons for the bath and hair wash routine and a welcome sleep. And that was Day # 113. 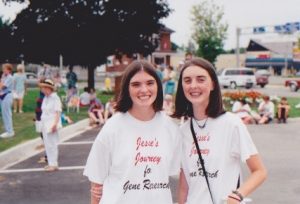