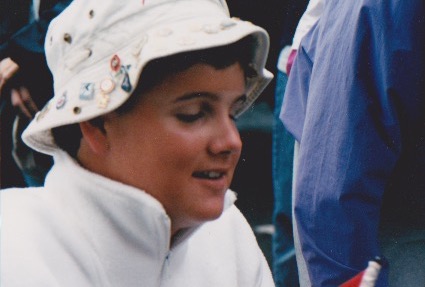 Day # 106 –September 2nd, 1995 This is another of those days where we are up very early. There is going to be a lot of shuffling around today as the route plan has us driving from Oshawa back to Dundas so that we can take in Hamilton and St. Catharines on a Saturday when there are lots of people on the road.   We keep adding more pins to Jesse’s hat and he keeps smiling and thanking people who have taken the time to come to the side of the road and to make a donation.  Holding Jesse’s arm up so he could shake hands with so many people sometimes slows us down, but Jesse and I both know the value of saying ‘thank you’ to people.  The mayor of Dundas joins us as I push Jesse up what turned out to be a much bigger hill than I was expecting.  We have lots of volunteers with us today including Helen and Gord Wainman, Chris May, Haanam Hamouda and Perry Esler, all co-workers from London. I can never thank these people enough for all they have done to keep Jesse’s Journey moving toward its goal.   On the road we stopped to do an interview with CHCH-TV in Hamilton and with CHML 900 radio in Hamilton.  In St.Catharines we are greeted by the Fire Chief and the guys at the fire hall have a really nice lunch laid out and this is really a treat after so many days of fast food outlets over the last week.  Late in the day, our Road Manager Trish Federkow, takes me to a chiropractor who has worked on a lot of NHL players. His reception room is filled with all kinds of NHL memorabilia. Then it’s back into Hamilton for a 6:00 p.m. press conference where we received several cheques and we have an opportunity to show our video and it’s pretty obvious to me that a lot of people in the room are very moved by what they see.  Last night it was the wheelchair tires that needed changed and tonight, after dinner, we discovered that one of our vans has a flat tire. It’s like the tire gremlins are out to get us. We quickly get the tire fixed and head back to our motel. It’s been a long and different kind of day. I like it better when we can keep moving in a solid line of consistency. But I understand the need to include as many parts of Ontario as possible in the route, (and to keep our overall distance correct) in order to raise as much as we can for research.  Tomorrow it’s Niagara Falls. 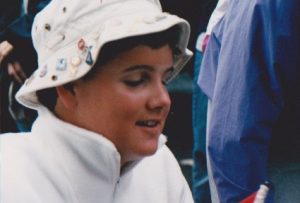 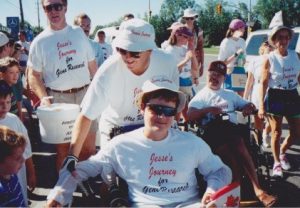