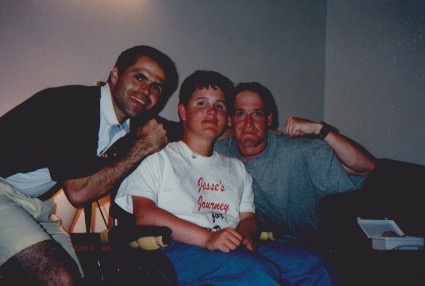 (Ed’s note: With the start of school approaching here in Ontario, over the next few days I am going to add some thoughts about school kids and what they are capable of accomplishing. Perhaps you might want to share some of these stories with the young people in your life.)

We are now into our fifth month on the road. Jesse is doing a great job and he never ever complains. I know that this is the month that school starts, and I want to get him home as soon as possible.

With our OPP escort behind us, people started making donations as soon as we left Whitby. There are a lot of hills along this part of the route, but the fact that people are donating makes a big difference when it comes to pushing Jesse up those hills. We managed to make Oshawa by 11:30 in the morning.

Our OPP escorts have always been great. I remember a day in northern Ontario when Sean Bagshaw was wearing a rainbow coloured belt and he and our OPP escort switched belts, just for a moment so we could take a picture. He was sure a good cop.

We did a lot of radio and television stuff while we were moving down the road. The temperature was good, and Jesse and I were making good time on the road. We can now move a lot faster than when we were coming through Toronto.

The faster pace on the road makes it a little more difficult for some of the more senior volunteers who have come out to help. They are doing a great job in collecting money, handing out brochures and doing all those things that have to be done to keep our little parade moving along the road. At the same time, I have to urge them to take breaks more frequently. I don’t want these wonderful helpers to get worn out, but Jesse and I have a need to keep everything on time in regard to when we finish in Ottawa. While Jesse hasn’t said anything, I’m sure he’s anxious to get back to school.

I also find it interesting how things have changed since we were in northern Ontario. In the north there was probably less traffic and in the early days and we didn’t collect a lot of money on the road but did very well in small town Ontario. Now that we are in the south part of Ontario, we are doing much better on the road than in big towns or cities. We always do well in small town Canada.

We finished or day on the east side of Bowmanville and then head to the home of Nick Paparella’s in-laws for another barbeque. Nick is well known to the TV audience in southwestern Ontario and he has been a longtime friend. He has always been very kind to our boys.

When Jesse was little Nick would take Jesse and Tim for a car ride and sometimes, when the situation was 100% safe, he would let the boys sit on his lap and “steer” the car. Nick used to make things up about how good his car was. He would take words from television commercials, mix them up and then tell the boys things like, “Oh this is a great car. It’s got radially tuned suspension!” The boys were very impressed.

The weather was good today and Jesse did very well. He enjoyed the food and conversation with Nick and his wife Evelyn at the barbeque, and then it was back to the motel for the bath and hair washing routine.

Sean and I spent time working on the wheelchair and changing tires. And so it went on Day # 105. 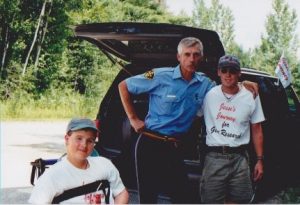 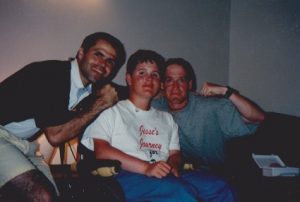