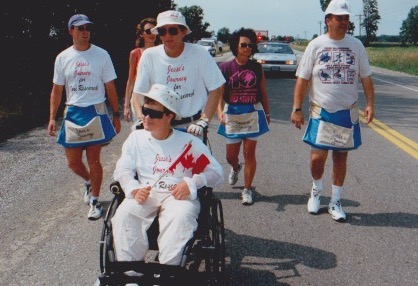 The good news today is that we don’t have to change motels, although we had a long drive from Oshawa to get to Niagara Falls. When we arrive at our start point and meet the police, we are also overloaded with volunteers. I pushed Jesse through Niagara Falls and at lunchtime we stopped at Brock’s monument (I hadn’t been there since my grade 8 school trip) and some of our volunteers organized a mid-day game of football on the grass at the park. Our lunch came from a huge ham that the wife of my old friend Howie Hilyer had sent along. Howie was the man who took me under his wing when I started my radio career in Woodstock. The ham we had at lunch came with a note saying how much Howie would have ‘enjoyed driving that motorhome for Jesse.’ Sadly, Howie had passed away before anyone ever heard the words “Jesse’s Journey.” He was a good guy and helped me a lot.

In the afternoon I pushed Jesse through Niagara-On-The-Lake where we met old friends, Val McGarry, Pat Goodland and Phyllis Bennett (I hope I spelled their names right). We also collected a pretty good amount of money, including a donation from an Elvis impersonator! You meet everybody out here on the road.

Before we headed back to our motel, we took Jesse down to see Niagara Falls. I’m sorry that nobody in our group had a camera. I would have liked a picture of Jesse and the falls. Maybe another time.

It’s a good thing I am burning up a lot of calories on the road because sometimes our meals are not as healthy as they should be. We had dinner at Doug Gilmour’s (Nacho’s and pop) before the drive back to Oshawa. In the morning we will have to drive back to Burlington to pick up our route once more, but at least we are getting back to moving in a familiar pattern rather than the hopscotching we had to do in Toronto and the golden horseshoe. While it paid off financially, I will feel a lot more comfortable knowing we are once again moving in a straight line toward Ottawa and the finish line.

I think it has to do with the amount of time we have spent on the road that I am feeling tired, sometimes even during the day. Jesse is doing great and in seventeen days, we can all go home. 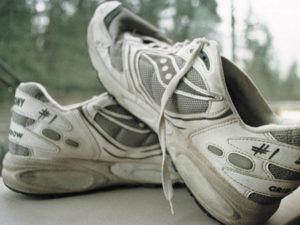 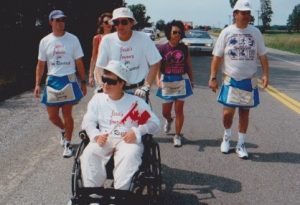