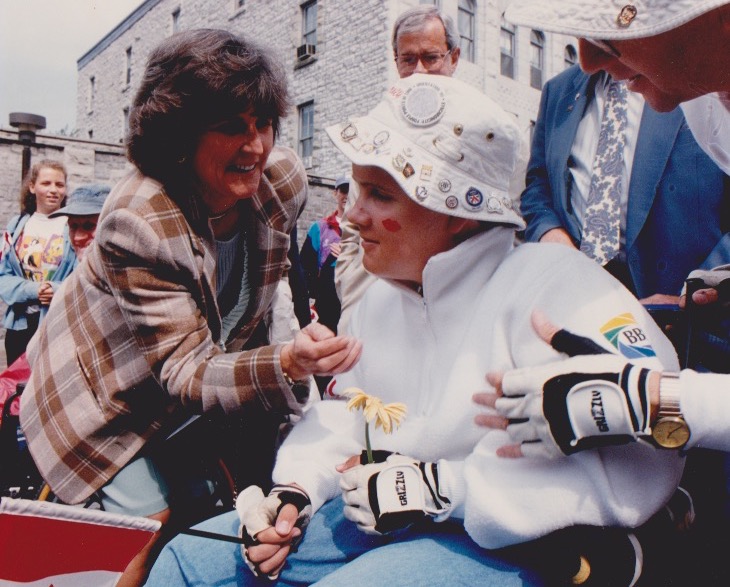 After breakfast at our motel we headed out to our start point west of Pickering and people are already starting to make donations before we get on the road. Late in the morning just as we completed a couple of TV interviews we got caught in a downpour. Lucky for us, we had just reached a Tim Hortons where we were stopping for lunch. The owner of the Tim Hortons was very gracious and said we could have whatever we wanted. I thought that really showed what Canadians are like. We were stuck for about two hours waiting for the rain to stop.

The best donation of the day was from a very muscular Italian construction worker who climbed down from the cab of the backhoe he was working and then climbed up a steep hill to shake hands with Jesse. He was well over a hundred yards away from us when he first saw us moving along the road. He left two huge dump trucks waiting to be loaded while he came to make a donation. This man certainly had his priorities straight and I thought to myself that he is probably a really good dad.

We were very busy on the road and we had great police escorts who put the “Jesse’s Journey” sign right on the side of one of the cruisers and they continually fired off the siren to attract attention. A couple of fire departments sent fire trucks and all-in-all it turned into a very busy and noisy afternoon. By the time we reached Whitby the recognition factor was working well, and our volunteers were collecting money steadily.

We reached our motel at the end of the day and cleaned up before going to dinner. I talked to Sherene on the phone and she told me about the most recent layoffs at television. They were all friends of mine and I felt sad that this is likely to be the case more frequently in the future.

Jesse had received a lot of good wishes today, including a lady who said to Jesse, “There’s a wee kiss that came all the way from Scotland.” She told me she was from Ayr, Scotland, not far from where I was born in Johnstone, Scotland. (Ed’s note: In the picture below, I was two-years-old on the day we arrived in Canada. I was wearing my kilt (which no longer fits) and the hair isn’t quite as curly either!) 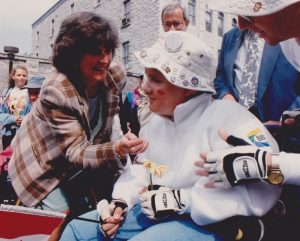