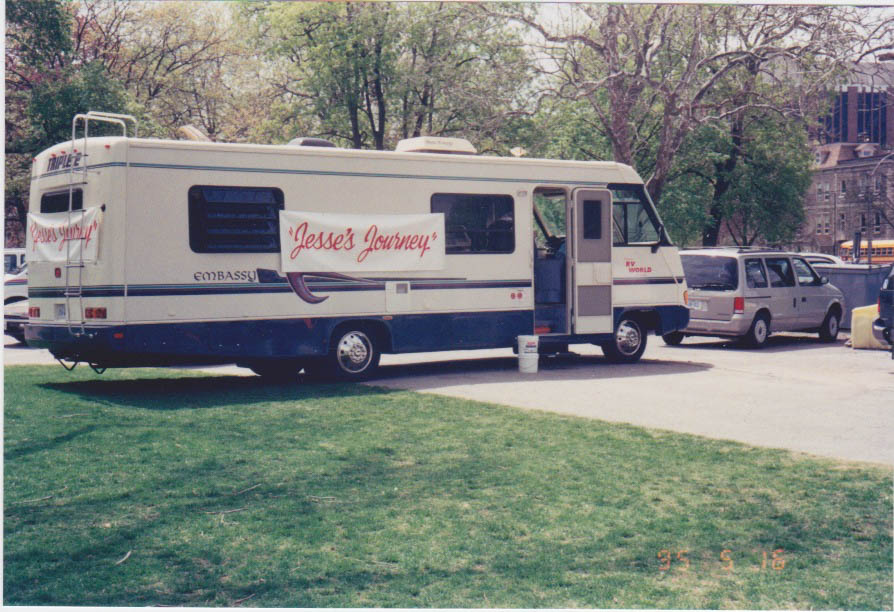 Our day started with a great breakfast at Sean’s grandmother’s house. Jesse was on the front page of the Toronto Star sports section and in a Toronto Sun picture with Don Cherry and Darryl Sittler and the Stanley Cup at the Hockey Hall of Fame. After doing a couple of early morning radio interviews, I began pushing Jesse east along the Danforth, heading to Pickering. We stopped briefly for a couple of photo ops in Scarborough and at City Hall in Pickering. I don’t remember where we had lunch. In the afternoon there was an unfortunate incident when an older lady who had been waiting to meet Jesse, fell and cut her nose. She had come out to take a picture of Jesse and I think she tripped on the curb at the side of the road. We stopped to make sure she was OK. She was sitting up on the grass and Sean was quick with the first aid kit in attending to her cut nose. She looked up at Jesse and said, “Well Jesse, I guess I have really fallen for you.” When Sean asked the woman if she would like a cold bottle of water?’ she looked up and smiled at Sean and said, “Haven’t you got anything stronger?” Before we moved on, Jesse cheered the lady up with a bit of conversation and an autographed picture in case the picture she was taking didn’t turn out. At the end of the day we all ended up in Jesse’s and Sean’s room at Howard Johnson’s. There was Jesse, Sean, Jesse’s older brother Tyler and me, and somehow it turned into an ‘all guys’ party with pizza and coke. We watched Friends on TV and it was a night of good laughs as well as a hot bath and hair washing for Jesse and for me as well. Sometimes the little things are very satisfying. I am happy that we are pretty well through the Toronto area and heading back to where we always seem to do very well—small town Ontario. 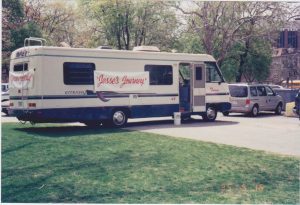 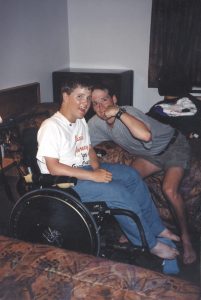