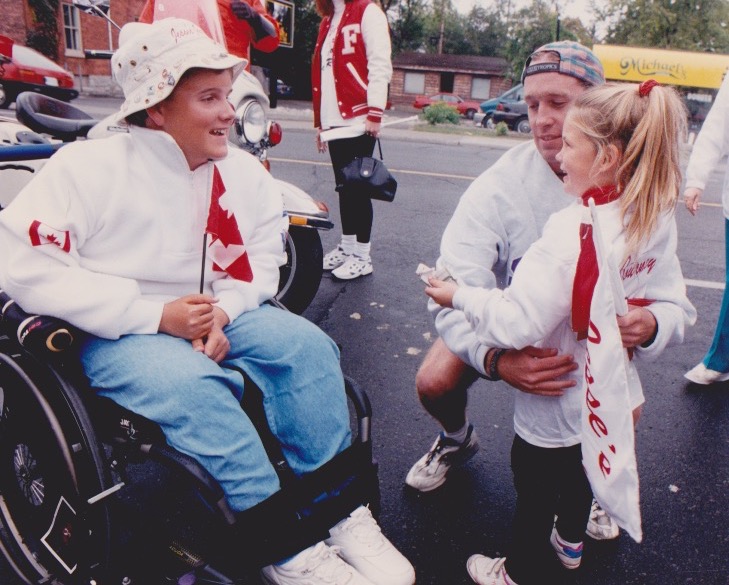 The day starts at 5:30 as we get Jesse dressed and after a very quick breakfast, there are five us in the van heading into Toronto. (Ed note: The five were Jesse, Road Manager Trish Federkow, Jesse’s attendant Sean Bagshaw, volunteer Don Mortenson from CFPL-TV and me.) After getting some makeup put on we are interviewed by CTV’s Valerie Pringle. The interview is about seven-and-a-half minutes long, which in TV time is a bit like eternity. We think it went well. We also did a CBC interview with Ted Barris. By the time we get back across Toronto and sort out a mix-up with the police, it’s almost 11:00 o’clock in the morning before we get underway. I’m knew I was going to have to pour-to-the-coal to it in terms of walking speed to try to make up for lost time. We have lots of helpers on the road with us, but we didn’t collect much money as traffic is moving very fast. Our route is taking us along Dundas Street. There are fightfighers with us and they have two fire trucks that are escorting us to City Hall in Etobicoke. We sign the city book and receive hats and T-shirts. In the afternoon, we carried on through traffic getting our distance completed and collecting donations when the traffic slowed. Then its back to the motel where I fell asleep and missed supper. I also slept through the fire alarm that went off in the night and brought firefighters who, this time, were here on business! The crew scrambled to get Jesse into his wheelchair and moved after what turned out to be a false alarm. While I was asleep earlier in the evening, Don Mortenson stayed with Jesse and they watched some TV. That was yet another of the thousands of acts of kindness we have experienced. Sean was out measuring tomorrow’s route and getting the oil changed in the van. I don’t know how he keeps it up, walking in the day and taking care of Jesse overnight. I guess being 22 has something to do with it. 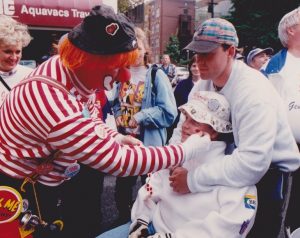