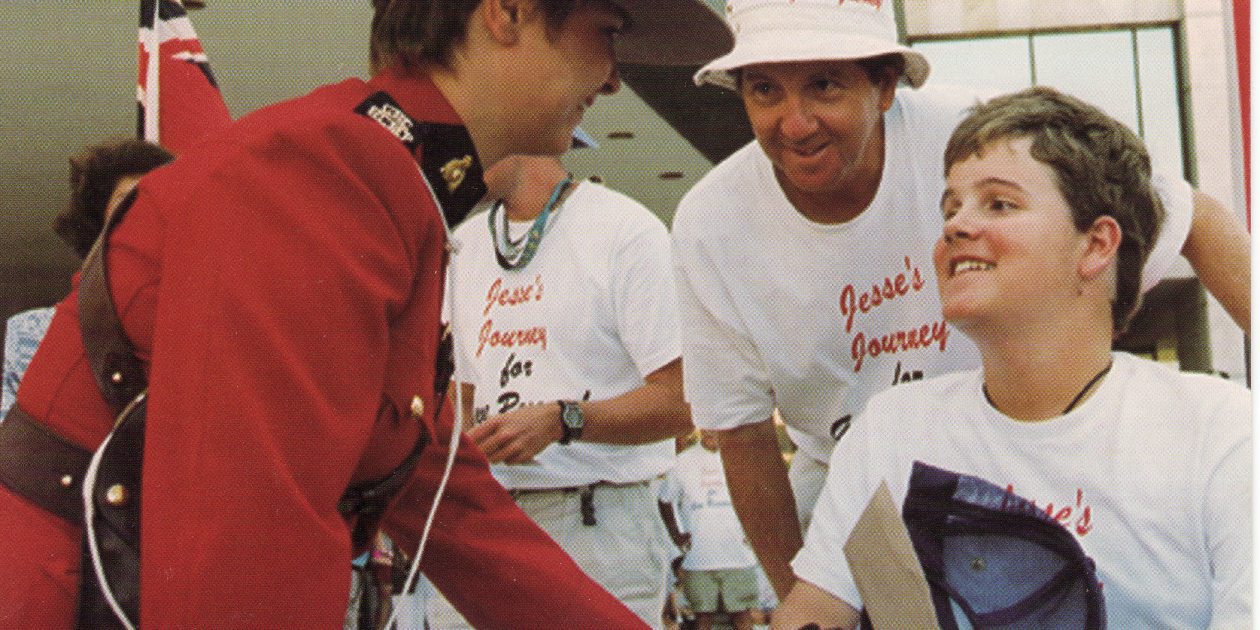 Once again, Jesse and I are up early and ready to resume the hectic pace that has become our lives over the summer. By 7:30 the road crew gets us to Greenhills Golf Course where we finished on Saturday. The morning hosts from FM96 are doing their morning show live from this location and talking with them is one of seven interviews we did while the road crew was making final preparations for getting underway. There were walkie-talkie batteries to check every morning. Cold water and fruit snacks were loaded on board the mini vans. There was a briefing with the police escort to make sure everything is coordinated, and the days volunteers were given the safety lecture before we could get underway. On this day, there is a huge contingent of people ready to walk with us. From the moment we get going, there are hundreds of people waiting to see us and shake hands. I can see that this is going to be a tiring day. Jesse and I stop each time we come to a person in a wheelchair who has made the effort to come out to the side of the road. These are the people who really see Jesse as their champion. People are honking and waving, and kids have signs everywhere and all kinds of businesses have greetings on their billboards. The Blue Knights motorcycle group joins us at Wharncliffe Chrysler, and while we are glad they are with us, we are having a little trouble with the exhaust from the motorcycles in front of us. I don’t want this to be a problem for Jesse.
When we turn onto Wellington Road heading north into the city, the crowd continues to grow. The McDonald’s restaurant on Wellington Road has set up a cold drink location and all along the road people are pressing into our hands cash, cards and guardian angel pins and flowers and hats–and teddy bears. Jesse is swamped and the escort van is filling up with ‘stuff.’ A band joins us at Horton Street, and we make our way to City Hall where mayor Dianne Haskett greets us along with her daughter. At Reg Cooper square there is another huge crowd. My old friend Bill Brady is the master-of-ceremonies and there are several gifts and cheque presentations after the national anthem which I was happy to note, everybody sang. One of the highlights of this stop is learning that a park is going to be named after Jesse. That’s a really nice touch. Jesse and I both spoke, and I thanked the many ‘volunteers’ who have come out to help. In the afternoon, after lunch at City Hall, we headed back to the road making our way east along Dundas Street. There were hundreds of people waiting to take pictures and make a donation – which is the whole reason we are out here.

We pushed on to Shaw Road on the east side of London before being scooped up and taken into Thamesford where a fire engine is waiting to escort us to a barbecue. After this event we returned home for our final night in London before heading east. It has been a long day, but it’s also been a good day when it comes to funding research.

(Ed Note: In times when we were driven forward to meet a time commitment at an event, we always returned to where we were left the road to keep our actual distance true and accurate.) 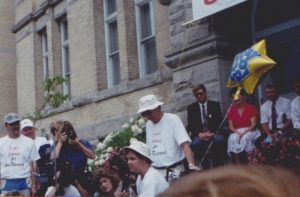 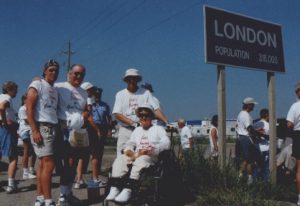