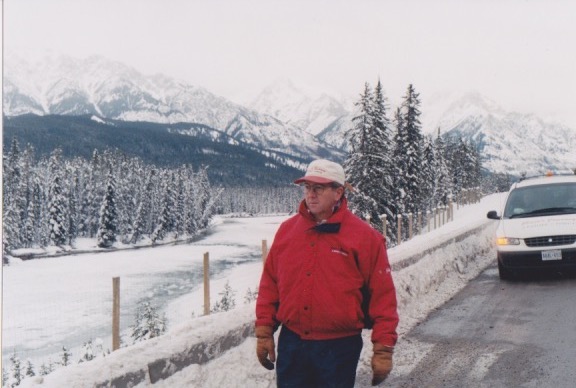 But before we reached Sicamous, there was another adventure about to unfold in Glacier National Park, high in the Rocky Mountains as we made our way through the Rogers Pass.

Picture this. It was dark and just before 7:00 o’clock in the morning. Inside the motor home it was nice and warm. Outside it was bitter cold. Ed Coxworthy was stirring his famous Newfoundland porridge on the stove. You could smell the coffee that was being brewed and the toast in the toaster. On the kitchen table there were mugs, tea bags, knives and spoons, milk and cream, brown sugar and strawberry jam. It was looking like a routine morning. But things were about to change.

The windows of the motor home were all steamed up (sometimes we drew happy faces on the windows just for fun). We could hear the comforting hum of the motor home engine as it was being warmed up for the day.  The two mini-vans were also being warmed up as we were getting into our road outfits and preparing for another day on the Trans-Canada Highway.

Suddenly there was a huge BANG!!

Ed Coxworthy shot out the door of the motor home without even grabbing his coat, even though it was almost minus 30 degrees outside. He headed right for the mini-van where the noise was coming from. After turning off the motor, Ed lifted the hood of the engine compartment and there he found what was left of the fan belt that had been flopping around in the engine compartment after it ripped apart. That’s when Ed’s street smarts kicked into gear.

After shutting off the second mini-van, which was running just fine, Ed carefully removed its fan belt, and using a fishing knife, he gingerly sliced that fan belt all the way around to make two fan belts. He said to me in that familiar Newfoundland accent of his, “By the Jesus Johnny, I don’t know if this will work or not, but it might.”

Well, it did work. It worked all day long until we were able to get things fully repaired at the end of the day.

Seeing what Ed had done, I thought to myself, ‘Not bad Ed Coxworthy from Bell Island, Newfoundland. Not bad for a guy with very little formal education.’ Then I thought about what that action said about someone. And what it said to me is that, it doesn’t matter how many initials you have after your name, or how many titles you have in front of your name. What really matters in life is what you are willing to do in any given situation. That is what determines your character. Ed Coxworthy wasn’t short on character.

It’s snowing heavily on Christmas Eve when I ended my day on the road in Sicamous, nestled in a mountain valley on the shore of Shuswap Lake in the North Okanagan.

Getting set for our one-day break, I’m excited because my son Tyler, Jesse’s older brother, is coming by bus from Vancouver to join us for Christmas. When I reached the motor home at lunch time and asked Ed why Tyler wasn’t here yet, he said, “I think he’s going to be late because the buses are running late in the snow.”  Ed, who always had lunch ready, was a bit quiet and didn’t tell me that there had been a crash involving a Greyhound bus and a tractor-trailer. I didn’t know that the whole road team was holding its breath. A short time later, Tyler arrived safely. We found out later that no one was killed in the accident and there were just a few minor injuries. Tyler was on the bus in front of the one involved in the crash. I was a dad who was very thankful for his son’s safe arrival for Christmas.

Our rooms in Sicamous are on the second level of the two storey Monashee Motel and in true Canadian fashion, Lions and Rotarians have worked together to make sure the rooms are decorated just like home, because for us, that’s exactly what it is. There is a Christmas tree and decorations and Christmas lights. There are even lights along the railing outside our rooms and the bright colours really sparkle in the blanket of white that’s been falling steadily for several hours.

Another surprise was my brother-in-law Glen arriving after flying from London to Vancouver and driving through the mountains to Sicamous. In his usual casual manner, Glen just opened the motor home door and said, “Hi. It’s me.”

Inside our rooms, the real meaning of Christmas continues to unfold, and it’s wonderful. We are complete strangers to the service club folks in Sicamous, who have filled our little kitchen with lots of food, including a big turkey and all the fixings. Somehow it’s just what Canadians do for each other.

From our rooms we pulled together a couple of slightly wobbly arborite tables with chrome legs. With a tablecloth decorated with holly and berries, plates that were a little chipped and silverware that didn’t exactly match, it was perfect. We even found a couple of tall white candles and some glass candle holders in the kitchen drawer to make things feel even more like home.

Christmas morning dawned with a clear blue sky and a remarkable stillness as we walked across the Trans-Canada Highway to have breakfast at the Husky truck stop with about 35 people who were also having a Christmas breakfast.

Walking across the Trans-Canada Highway on our way back to the motel there was no traffic and if we’d had hockey sticks with us we could have set up nets and played road hockey right there on our national highway. Only in Canada!

Before sitting down to Christmas dinner, we opened some small presents and I was amazed at how people had been able to hide all these little gifts on board the motor home and in the mini-vans. I didn’t quite feel like Elvis, but my brother-in-law Glen did give me a pair of blue-suede slippers for Christmas.

And after the most memorable Christmas dinner in my life, we settled down for an evening of sharing road stories from all across Canada to keep our minds from thinking about how much we all missed being home for Christmas.

Tomorrow we will be back on the road starting into the final week of 1998.

Maybe you should write a story and paint a picture about your most memorable Christmas. It will probably mean a lot to someone who finds that piece of paper and reads that story many years from now.

PS:  I still have the slippers. 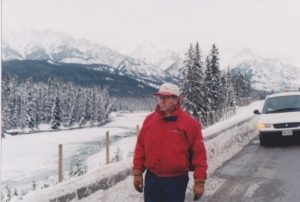 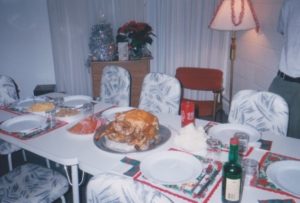