20-years-ago today I was in Kelowna, British Columbia as we were beginning our descent down into the Okanagan Valley. We were half-way across province number ten, and as 1998 was coming to a close, the snow of the past couple of weeks switched over to rain.

In this week’s story, I’m going to jump ahead to New Year’s Eve 1998 even though the story is a little bit more like Valentine’s Day.

We are heading south and have left the Trans-Canada Highway and are now on Highway 97A, which takes us through the heart of Canada’s ‘fruit basket.’ We will rejoin the Trans-Canada at Hope, British Columbia, after making our way through lots of little Okanagan towns like Peachland and Summerland.

On New Year’s Eve we are in Penticton when we finish our final road day of the year.  When I called home it was just three hours until midnight in Ontario. Sherene sounded tired and hearing her voice made me very aware that so many people were paying a price to make this project work. While the daily road routine had been taking its toll on everyone on the road for almost ten months, far from the spotlight, Sherene was often on her own looking after three boys and quietly taking care of everything that needs to be done to keep a household running, and to make a house a home. I may have underestimated the workload Sherene would face while I was away, but I didn’t underestimate her ability to cope with it. We ended the call by wishing each other a Happy New Year and as I said goodbye and hung up the phone, I thought about how it was now January (at least in Ontario) and we are into our final month. And then, we can all go home.

At dinner on New Year’s Eve we took a picture of Bevin Palmateer, our advance man, who was wearing six wrist watches on his arm, so he could tell when it was midnight in each of the time zones we have experienced.

Still thinking about Sherene, I toasted the New Year with a non-alcoholic wine and went to bed, leaving the road team to ring in the New Year and hopefully have some fun. Tomorrow would be another day and another year.

As I looked back on 1998 I didn’t know that in the years ahead I would joke about how I felt personally responsible for three marriages that grew out of our adventure on the road.

Bevin Palmateer and his girlfriend Renata Van Loon would marry in September of the year that was about to begin.

In August of 2000, Maureen Golovchenko, who managed the ‘home team’ in London would marry Phil Spencer, another road volunteer.

But the love story that began to unfold on the road at Christmas time was the one that I’m most certain was  sparked by Jesse’s Journey.

The story begins in Revelstoke, British Columbia, a couple of days before Christmas.

It’s minus 16 Celsius on the morning of December 22, and the sky is bright blue, as we hug and say goodbye to Peter Garland and his wife Ann Hutchison who are heading home for Christmas. They are tremendous volunteers, and between the two of them, they have been with us in seven provinces.

There’s quite a lot of shuffling going on at this point. Kay Coxworthy, the wife of our motor home driver Ed Coxworthy, has arrived for Christmas from Bell Island, Newfoundland. I think this is longest time they have ever been apart.

On balance, the departure of volunteers leaves us with a very small crew for the holiday period, but we’re sure we can manage.

We are really counting on the arrival of one new recruit who is on the way from London to spend Christmas in the Rocky Mountains with Jesse’s Journey. We have no idea how more than one life is about to be changed.

Dianne Steward is a pretty lady who was born in the south of England. With strawberry-blonde hair and sparkling blue eyes, she has a lovely English accent.

Dianne had called our office one day to say, “I don’t have anyone, so if somebody on the road team wants to go home for Christmas, I could go to British Columbia.”

After a snow-delayed flight to Kelowna, Dianne was met by an RCMP officer who made a late-night drive through the mountains to bring Dianne to Revelstoke.

Dianne arrived at 2:30 in the morning and five hours later she was ready to go work. Dianne Steward was now officially a part of the Jesse’s Journey family.

My friend Ted Eadinger, who was with us in Quebec and Saskatchewan, is back for another tour of duty as Road Manager and it doesn’t take him long to notice the new volunteer with the delightful accent.

Ted and Dianne had both recently found themselves alone. While I wasn’t trying to play Cupid, it was beginning to look just a little bit like it was going to be a very nice Christmas.

After a crash course about how things work on the motor home,  Dianne was out on the road with me when we were well south of Revelstoke. I never took any pictures while we were on the road, but when we caught up to the motor home at Craigellachie, British Columbia, I made an exception.

I took a picture of Ted and Dianne standing in front of the stone cairn that marks the exact spot where the last spike was driven to complete the Canadian Pacific Railway on November 7th, 1885. I had a feeling this might be a picture they would keep for a lifetime.

On Christmas Eve 1998, we are settled into our motel in Sicamous, B. C. and looking forward to having Christmas Day off.

I’m not sure if counts as a real date or not, but at the end of our day on the road, Ted and Dianne spent Christmas Eve having dinner at the Chinese Restaurant in Sicamous. I was beginning to wonder if Cupid’s work here was now finished.

PS:  Ted and Dianne have now been married for almost 20 years. Nice. 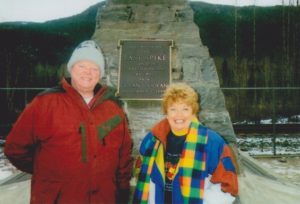 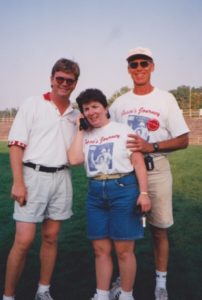 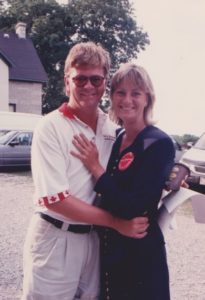