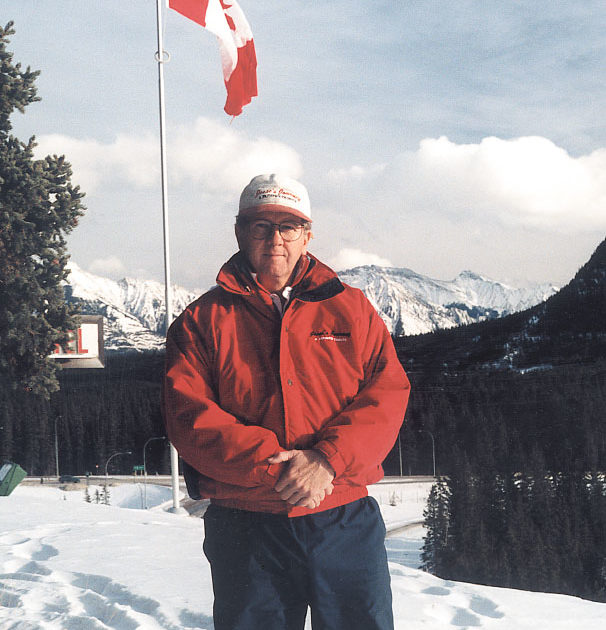 20-years-ago today at 5:00 o’clock in the afternoon, it was dark, and snow was falling when I stepped into British Columbia. (see video below)

The snow was wet and because it was dark, the road crew had me wearing my orange rain gear, which also made me more visible in traffic.

I remember thinking to myself, “I didn’t come to the tenth province to quit,.” Even though at this point I sometimes feel like I’m running on fumes. Our first stop in province number ten is Golden, British Columbia.

We often started our day on road the when it was still dark and sometimes I was so focused on pushing west that I would forget to look east. The road crew or the RCMP would sometimes honk to get me to turn and look at a glorious sunrise in the mountains.

Earlier in the week we left Calgary and after six weeks of crossing the Prairies, we are now completely surrounded by mountains. The road surface is also changing.

The Trans-Canada Highway back in Alberta is very wide with four lanes, a huge median and a spacious apron of asphalt for walking on the edge of the road.  Here in British Columbia, the highway is soon going to narrow, making things just a little more dangerous.

One of the first things I noticed as we started into the mountains is the coarseness of the sand they put down on the road when it’s snowing. It’s more like gravel than sand and when trucks pass by and the wind they create whips the sand up, it stings. It’s as if you are standing next to someone who is welding, and the sparks are hitting your skin.

And still, day after day, people continued to stop. A transport truck driver who stopped to make a donation said, “I’ve passed you every week for the past eight weeks, and I decided today is the day I’m stopping to make a donation.”

When we reached Banff National Park, park officials welcomed us and gave us a free pass for the motor home and our mini-vans. The owner of the Timberline Inn, which has a gorgeous view of Banff from up in the mountains offered us free accommodation and meals. This was a real treat and I remember having my picture taken beside the flag pole at the inn and thinking that the Prairies were definitely behind us.

Somewhere along the road earlier in day, a little girl and her mom pulled to the side of the road and came back to make a donation. I don’t know how she knew our story, but the little girl said, “I hope your sons going to be OK.”

I had talked to my son Jesse and my wife Sherene a couple of days earlier. They were just back from France, where they had taken part in a telethon for the French Muscular Dystrophy Association. I was happy to hear that Jesse had been able to go up the Eiffel Tower, take a boat cruise on the river Seine and visit the Louvre. And he was happy that he was able to help. The telethon raised $116M (CDN).

When we had arrived in the beautiful tourist town of Banff, Alberta, I didn’t realize how much I was going to enjoy soaking in the hot springs. In the cold air, there was a heavy mist hovering over the warm water in the hot springs pool. I think most people enjoy the hot springs as a tourist experience. For me it felt more like some kind of medical treatment for tired muscles. Whatever it was, it sure felt good.

I also had to smile when I remembered Jesse’s older brother Tyler, who had been at the Banff Centre for the Arts, telling me what the word Banff stood for.

B-A-N-F-F  Be Aware Nothing For Free!  I did mention it’s a tourist town didn’t I?

Another interesting thing that happened in Banff, was walking past a little independent book store on the main street at the end of my day on the road.  That evening, I looked through the shop window and saw a dog (yes, a dog) “pawtographing” books. I just had to open the shop door and listen the little bell over the door ring as I went inside to find the story here.  It turned out that the owner of the store had written a book about the dog, who was the stores’ mascot. When kids bought the book, they liked having the dog sign his “Pawtograph” in the front of their copy of the book.

I’m sorry my journal notes didn’t capture the name of the dog. I guess I was tired. But, I can tell you the ‘ink’ that was being used was completely harmless, as in “No animals were harmed in the production of this movie/book.”

After undergoing another medical check, my third since Newfoundland, I was given the green light to keep going.

And even though the narrower road made it difficult to stop, people still pulled over to donate.

In the mild but miserably wet weather a man without a coat walked back toward us to make a donation. I could see, even in the light rain that was falling, that he had tears in his eyes as he turned and left. I seldom ever heard the story about why these people stopped.

This section of the Trans-Canada Highway has now narrowed to just two lanes, with a forest of fir trees rising steeply on both sides of the road.

The good news is that the wind is gone. The bad news is that it has been replaced by freezing rain. The ice made walking very difficult and the rain polished the ice, making it extremely slippery.

Transport trucks were crawling past me so slowly that I could read the names of the tire manufacturers as the wheels that were dripping with water turned very slowly about three feet to my left.  Every now and then one of these huge trucks would start to slide sideways on the ice toward me. Sometimes, I was moving faster than the trucks.

You can’t imagine what a relief it is when a huge tanker truck, dripping with water finally inches past you and out of harm’s way – especially when the sign on the back says: Propane – Flammable! 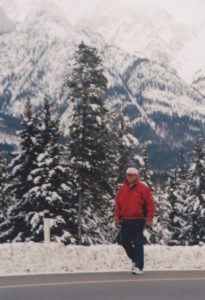 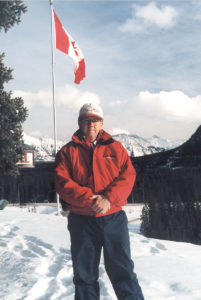 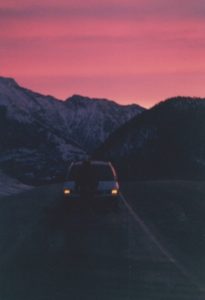