20-years-ago today I was in Calgary, Alberta.  The good news is, we now have fewer than 50 road days left to complete. The bad news is – it’s minus 28 – and the Rocky Mountains are straight ahead.

In the past few days I’ve become aware that I am not as mentally sharp as I want to be. I think there’s a reason for this and it’s more than just the wear and tear of grinding out 33-kilometres a day. Now, it’s the extreme cold. The road crew has really been after me about constantly checking for frostbite. I’m doing my best to listen to what they’re saying.

The other complication is the change of time zone and increased media pressure. We are now in Mountain Central Time and this brings another challenge. Radio stations in Ontario, wanting to do interviews at 7:00 a.m. during their prime morning ‘drive time’ need me at 5:00 a.m. Alberta time. This is only going to become more difficult when we enter the Pacific time zone and those interviews have to be done at 4:00 a.m. I never really fall asleep again after those early morning telephone interviews when its pitch-black outside. And it seems like almost every night we are making an appearance somewhere and it keeps getting later and later when I finally to bed.

Out on the Trans-Canada Highway there’s a swarm of microphones and cameras and newspaper reporters when we officially reach Calgary. The mayor of Calgary welcomed me to the city with a Smithbilt white hat. People often refer to this type of hat as a Stetson.  It’s not. The John B. Stetson Company was established in Philadelphia in 1865. The Stetson cowboy hat was manufactured in Garland, Texas  until the company went bankrupt in 1986.

That hat was made popular by a lot of people, like John Wayne, Clayton Moore (The Lone Ranger), Gene Autry, and Larry Hagman, who played J. R. Ewing on the television series Dallas.

When you receive that cherished white hat in Calgary, it’s a Smithbilt. The company is the original manufacturer of the Calgary White Hat, known as Calgary’s symbol of hospitality. And it’s proudly made in Canada!

Calgary also included a Saturday night stop at the Saddledome and an appearance on Hockey Night in Canada as the Flames hosted Phoenix. The Flames presented me with a hockey jersey that said on the back Jesse’s Journey 98.

While these kinds of tributes were very nice and very much appreciated, the real story was being written out on the Trans-Canada Highway by three men from Ontario, who flew west to join me on the road.

Long-time friends Harry Norris, Blythe Lannin and John Scott were sitting in a coffee shop in Mitchell, Ontario on a Saturday morning in the fall of 1998 when they decided to fly to Alberta to walk with me. Harry arrived with a group of ‘sponsors’ for his walk. On the day that we finished in Strathmore, Alberta, Harry Norris had been on the road with me for the day’s entire 33-kilometres.

The amazing part of this story is that, two years earlier, Harry Norris underwent a double heart bypass!

Those friends from Ontario did Mitchell proud, and I was very proud of the three of them for their dedication and commitment to research. In a nutshell: they got it.

From the edge of the highway we could see a lot of antelope and it was very encouraging that people not only honked a lot, but they continued to stop and make donations.

There was a lady who had looked after Jesse when he was in intensive care in hospital. There was a transport truck driver who was hauling 600 Christmas trees from Wisconsin to Calgary and Edmonton. And silently working to make sure everything run smoothly were the road crew and the volunteers. Some of those volunteers, who joined us at their own expense, had been with us in different parts of Canada. They were the ones who took care of everything that had to be done to keep “Jesse’s Journey” moving along the road.

And on my mind was Jesse, who had inspired so many people. Jesse was in Paris, France along with my wife Sherene and my friend Mario Chioini, who was somewhat shocked when I asked him on the road back in Quebec if he could take my wife and son to France to help with a telethon. Jesse, Sherene and Mario were flying home as we drove through the dark, back to another motel in another town. Struggling to keep my focus, the motels were becoming just a blur.

I was painfully aware that I was starting to run out of gas. Sitting in the back of the motor home, I remember thinking about how we were getting close to province number ten as I shut my eyes on the drive back to our motel.

And up ahead were the Rocky Mountains and the last province.

What mountain are you determined to climb in your life? 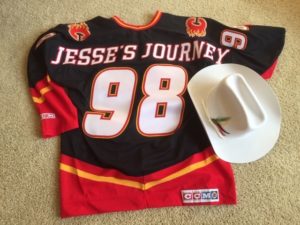