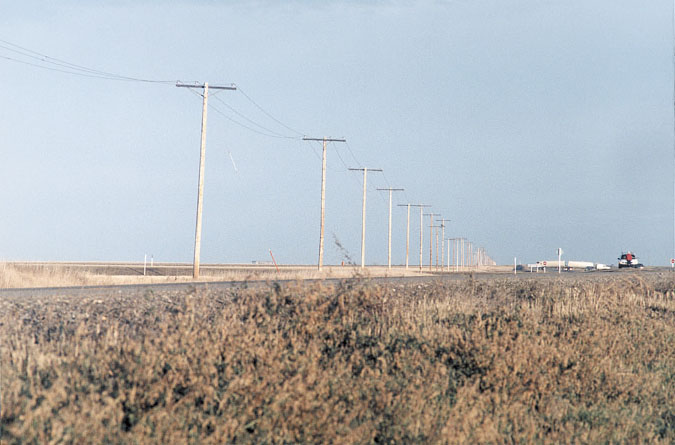 20-years-ago today I was in Regina, Saskatchewan. We were in province number eight. The Trans-Canada Highway took me through a lot of little places I had never heard of before. I only have recent statistics to go by, so you’ll just have to imagine how small these places were  back in 1998. Fleming, Saskatchewan, population 75 people, is the first place you pass through after crossing the Manitoba-Saskatchewan border. Next up, and the first place of any size is Moosomin, Saskatchewan which today has a thriving population of 2,485 people.

Of all these little places in Saskatchewan, its Grenfell, (Population 1,099) that has some interesting history. Grenfell is where Dr. Robert Ballard, of pet food fame was born. His business life started early with a milk route and a paper route. Soon after that his family started making dog food in the family kitchen and everybody in the family participated. It didn’t take long before Bob opened a canning plant and eventually built his own canning line. He was an innovator, forward thinking and especially interested in automation. His next adventure included acquiring a failed soft drink operation, but with time the first fully automated soft drink canning plant in Canada was successfully up and running. When he wasn’t focusing on business, Bob had a love of horses. He rode on the Canadian Equestrian Team from 1947 to 1958 and he said it was always an honor to ride for his country.

The makeup of Grenfell reflected a lot of Prairie towns.  Chinese rail workers from the building of the railroad in the 1880s settled down and stayed. As late as the 1960’s, Grenfell, Saskatchewan with its 1,099 residents had two Chinese restaurants on Main Street.

Out on the highway it was like I was living on borrowed time. It still hadn’t snowed. The air temperature though was a different story. We were into minus double-digits and I was back to wearing the long johns that I wore in the early days back in Newfoundland.

There was not a lot of traffic along those long lonely stretches of the Trans-Canada, but still people in cars and trucks and transport truck drivers continued to stop and make donations. In the bitter cold and wind a man heading east stopped his car. He crossed the two eastbound lanes and made his way across about sixty-feet of median and then crossed the westbound lanes to shake my hand and make a donation. He heard our story on the radio and said he just had to stop.

Radio played another key part in Jesse’s Journey through Saskatchewan. My good friend Peter Garland was back on the road with us and from our motor home in the middle of Saskatchewan, he conducted an auction for Jesse’s Journey as a part of the morning show on CFPL Radio in London and raised several thousand dollars for research. It sounds easy but when you think about all that went into making that event happen – it was something special. It wasn’t just the time change, it was all the whistles and bells that had to be in place to make that kind of two-way communication work. On that cold morning, huddled inside the motor home and wearing his headphones, Peter really typified what Canadians do when it comes to helping each other. Canadians still help one another, but sadly, that kind of radio power seems to have faded over time.

Saskatchewan is a lesson for artists as everything disappears to a point on the horizon. Terry Fox once said that the way to get across Canada is “one telephone pole at a time.’  Those words were never truer than when you are in Saskatchewan.

It was often dark at the end of our day on the road. We took Ed Coxworthy’s advice and again started using the flashing yellow strobe lights on the back of one of our escort vans. The lights could be seen a mile away and certainly gave motorists who were coming up behind us on the Trans-Canada, plenty of warning that there was something happening up ahead.

From the back, the strobe lights on the roof made the van look like it had Mickey Mouse ears. When we put those lights on the roof back in New Brunswick, that vehicle was quickly nick-named “The Mickey Van.”  By default, the van that did not have the Mickey Mouse look was just as quickly nick-named ‘Non-Mickey.’ Bevin Palmateer often drove Non Mickey when he was a couple of days ahead of us arranging school visits and media interviews.

We took Bevin’s picture when he rejoined us on the road one day in Saskatchewan. We took the picture alongside the Trans-Canada Highway where the tumble weeds would get caught up against farm fences and create what looked like a Hairy Mammoth wall.

Bevin was smiling when we took his picture on that day.  I’m pretty sure it’s because he was very relieved. I always thought that he came back to us every now and then just to check and see if we were still there. 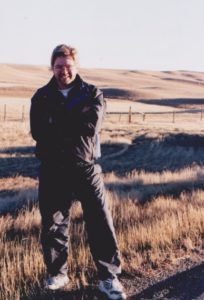 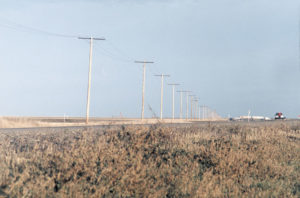 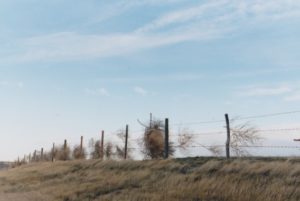