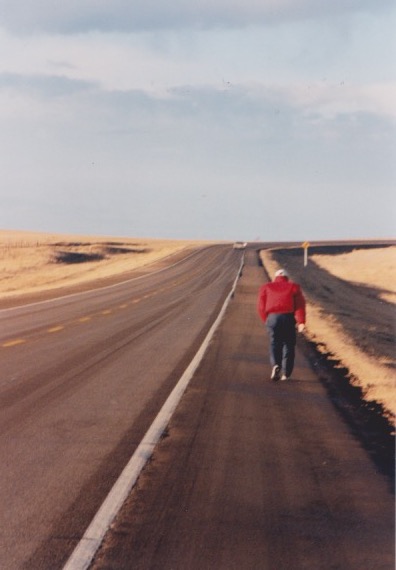 20-years-ago today I was in Virden, Manitoba, almost 300 kilometres west of Winnipeg.  The daily routine on the Trans-Canada Highway, which starts each morning with a 360-degree look to the horizon, is very repetitious. We have moved our start time on the road back a half hour to 8:00 a.m. to take advantage of the weather as Mother Nature is sending us some nice days with clear blue skies and day time temperatures in the mid-teens. This is a real bonus. I even get to wear my shorts again!

Virden is a little Prairie town of about three-thousand people, with a history similar to a lot of other little towns in western Canada. Virden started out as a railway camp on Gopher Creek when the CPR arrived in the 1880’s.

It’s also the birth place of Dave Rockola who made his mark in the juke box world. Believe it or not, the name Rock-Ola is actually derived from the name of the company’s founder. It also happens to be a real cool name for a jukebox, implying a “rock-n-roll” play on words. Dave Rockola started out as a mechanic in a shop that repaired coin-operated scales. He started making juke boxes in 1935 and after World War II, the jukebox industry was booming. The boys were coming home from the war and it was party time. When Rock-Ola introduced its “Moon Glow” series of juke boxes, business took off through the 1950’s and 60’s.

On the edge of the Trans-Canada Highway, the routine of grinding out 33 kilometres day after day, left the door open to working on ‘Highway trivia.’

People sometimes wonder how we knew exactly where to start each day, particularly when it had been snowing. The answer is pretty simple. At the end of the day, regardless of whether we were driving east or west to where we were staying for the night, we set the trip meter on the motorhome to zero. If, for example, we drove 45 kilometres to get to our motel, then in the morning we reset the trip meter to zero and drove 45 kilometres to get us back to the same spot on the highway. We also spray painted the road and sometimes tied a bit of red ribbon to a fencepost or a stretch of guard rail. (Just for the record, on the Prairies our longest drive back to our start point was 80 kilometres.)

Here’s another little piece of highway trivia for you. Have you ever noticed when you are driving along a highway and you come to a section of guard rail, that there is a little diamond shaped sign at the beginning of the guard rail? The top half of the sign is silver, and the bottom half of the sign is green. At the end of the guard rail you’ll see the same sized sign, but the colours have been reversed with green on the top and silver on the bottom.  Do you know what that sign means? I’ll give you the answer at the end of today’s story. No jumping ahead. That would be cheating!

Here’s another bit of highway trivia for you. We are all familiar with the solid white line painted on the road surface to indicate ‘no passing.’ We also know the dashed white line that indicates you can pass another vehicle if it’s safe to do so. Most of the painted white lines on the Trans-Canada Highway on the Prairies are the dashed  white line. How long do you think those white lines are?  That answer is also at the end of today’s story. And still – no jumping ahead!

Virden, Manitoba, was one of the first towns to give the Prairies its world-wide reputation as Canada’s bread basket. Large-scale agricultural development  arrived about the same time as the railroad in the 1880’s. Virden became a transportation, processing and service centre for hundreds and hundreds of surrounding farms started by settlers from Scotland, England, Ontario and Nova Scotia.

One of our volunteers from Manitoba was a retired farmer and member of the Lions Club from Holland, Manitoba who taught me a lot about wheat, canola, rye and flax. We talked about farming amidst the honking of car horns, and transport truck air horns as we made our way along the Trans-Canada Highway, stopping whenever people pulled over to make a donation and take some pictures.

I learned that farmers in this part of Manitoba were getting about $4 a bushel for wheat [in 1998]. The farmers were part of a system where they received an initial payment of $3.25 and then the government might pay them an additional $.75 per bushel depending on the final price the government was able to negotiate for the sale of the wheat. Farmers were getting about double that price for canola which is used in making margarine. The Flax that is grown in this part of the country is used in making Linseed oil and linoleum products.  I also learned that Manitoba produces a higher yield of wheat per acre than Saskatchewan because Manitoba has a more consistent rainfall.  It was all interesting stuff, but still, it  didn’t make me want to become a farmer. I guess I’m just a city boy.

The people who pulled to the side of the road to make a donation in Manitoba were a welcome sight as Canada was now looking very flat and I knew the contour of the land wasn’t going to change for at least another month.

Some other interesting things happened along the road in Manitoba. We had two school teachers from London join us as volunteers for the week. Marilyn and Carolyn were great volunteers. And I knew they were very well organized because when I got back to my motel room one night after another 33 kilometres of highway, the freshly cleaned laundry was there as usual, except this time – it was nicely folded! It was kind of like having your mom along for a week.

And donations sometimes came from strange places. There was a truck driver approaching me one day and he was flashing his lights and laying on his air horn. I didn’t know what was going on, but when drove by he threw a muffin out the window toward me. It was nicely wrapped in cellophane and there was an elastic band wrapped around the muffin, holding a five-dollar bill neatly in place!

At lunchtime one day, it was wet and windy and when I stepped outside to get back onto the highway for the afternoon, there were two $20 bills pinned under the windshield wiper of one of our mini-vans. We were in the middle of a small town and yet no one had touched them, and they were just merrily flapping in the wind and rain. Sometimes people just quietly donated in their own unique way.

And the painted dashed white lines on the Trans-Canada Highway are just over 10 feet long. A lot of people think they are 3 feet long. If they were, they would go by like a series of dots! Now aren’t you glad you know this? 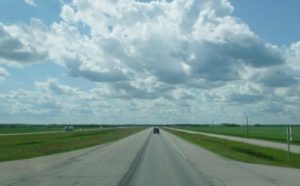 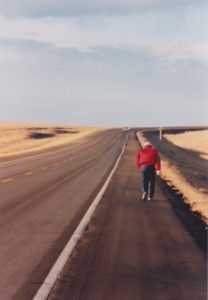