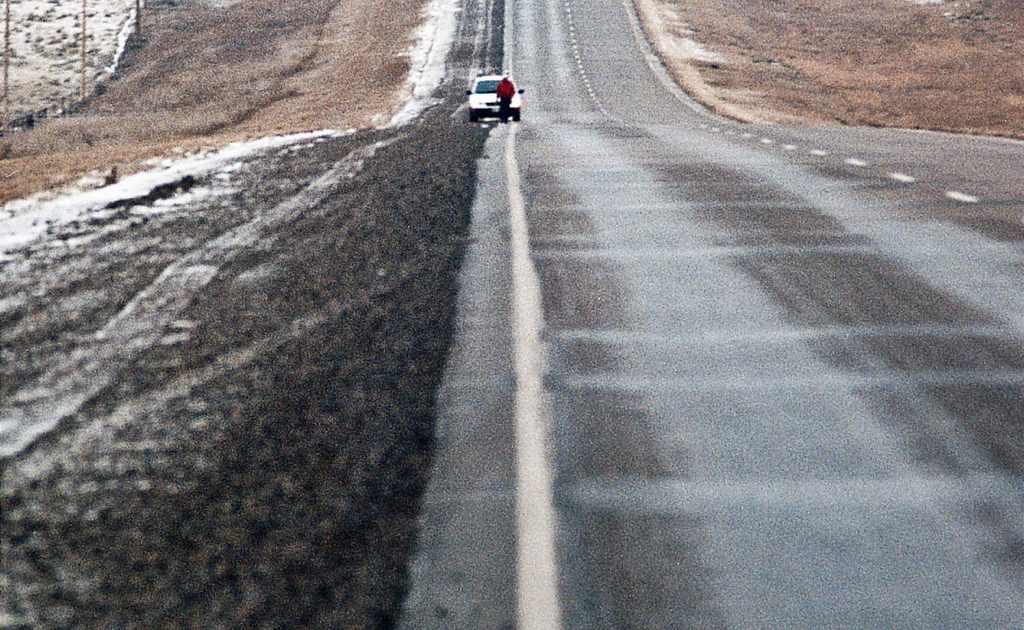 20-years-ago today I was in Portage La Prairie, Manitoba.

I have now been on the road for seven months and we are well into province number seven. There are grey clouds on the horizon. Winter is not that far away.

If you have been following along with these weekly postings, you might recall that I was getting a bit anxious because it had already snowed a couple of times when I was still in Ontario. I had been keeping the thought to myself that if I could make it to Winnipeg, I just might have a chance of making it all the way. Now, here I am west of Winnipeg and for the next six weeks I’ll be on the prairies before starting into the Rocky Mountains.

The big thing that has changed is the wind.

Even before I reached Winnipeg the wind was becoming a factor. And when the wind is coupled with a driving rain and dropping temperatures, things get pretty miserable pretty fast. And sometimes your emotions get caught off guard. That’s what happened a couple of days earlier when I was coming up to Steinbach, Manitoba.

It was like the unrestrained power of the wind seemed to be asking me again just how much I was willing to take. I
was back to wearing the fluorescent orange rain gear as the rain mixed with ice pellets stung my face. High winds sweeping across the open fields sometimes stopped me from moving forward at all. Leaning into the wind that was rocking the motorhome, I had to fight just to get the door open. When I was safely on-board for my first break of the day, the wind slammed the door behind me. My fingers were numb, my eyes were red, and it wasn’t until I was shedding the rain suit that I realized we had visitors.

I slumped into my seat at the kitchen table, rain dripping from my chin, as Ed Coxworthy set a cup of steaming hot chocolate in front of me before fetching a pair of clean, dry socks that had been warming on the motorhome’s heat vent. It was then that I was introduced to a man and his wife who had driven out from Steinbach, Manitoba to make a donation. They knew why I was here.

The couple had three children, two girls and a boy, and their son had died of Duchenne in 1995, when he was just 21. Cold and wet, I listened in silence as another father told me the story of the final hours of his son’s life. It was April when their boy was taken to hospital in Steinbach for the last time. Near the end, he could barely speak. The father said he awoke from a broken sleep when he was at his son’s bedside and heard his son say, “Cool.” He thought his son was cold and wanted a blanket, so he tucked a cover around him. Then he heard the young man whisper, “Neat.”

The man told me he said, “Son, what are you talking about?” His son was very weak and perhaps mistook his father’s voice for that of his mother. “Mom,” he said, “you have to see this. Come with me.” He died shortly after that, in the early morning hours of April 19. 1995, a month before Jesse and I took our first steps in crossing Ontario.

Before they left, the couple made a generous donation to Jesse’s Journey. As they stepped down the stairs of the motorhome, the father smiled at me and said he was sure his son was in a better place. He said his son was the kind of kid who was always happy and never complained. I was close to tears as we shook hands again and said goodbye. As I watched them drive away in the rain, the weather didn’t seem to be such a problem anymore.

After the man and woman left, Ed Coxworthy, who had listened to the story, said to me, “Johnny, if you were to throw all the troubles of the world into a hat, you’d want to pull your own back out.”

I know I met other people along the road that day, but I can’t remember any of them. Looking west at the end of the day when we were about to turn and drive back into Winnipeg, it was getting dark and there was a long thin line of red running across the sky right at the horizon line. I took that ‘red sky at night’ as a hint that maybe we would have better weather tomorrow. I can still see that sky and will always remember that day.

I also took a moment to think about how, I had made it to Winnipeg.  And now, I’m wondering… 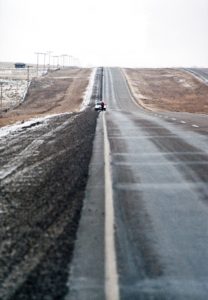 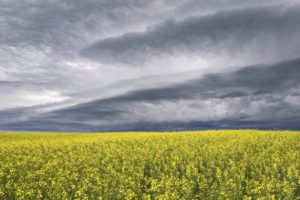