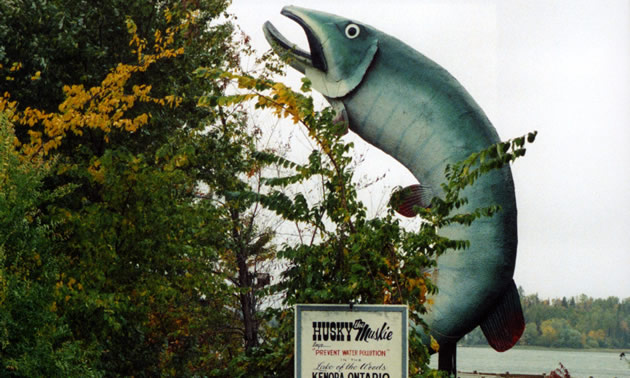 20-years-ago today I was in Hadashville, Manitoba, having crossed the Ontario-Manitoba border a couple of days earlier. We are now in province number seven.

When we left Kenora a couple of days ago, I passed the giant billboard showcasing Husky the Musky. In the 53 kilometres of Trans-Canada Highway from Kenora to the Manitoba border I was thinking about the various roadside attractions I had passed so far.

There was the giant lobster in Shediac, New Brunswick, that weighs 20 tons. The giant lobster was a created by Winston Bronnum, the same artist who created Jumbo the Elephant in St. Thomas, Ontario. Jumbo weighs in at 38 tons.

Then there were things like the Big Nickel in Sudbury, the Big Goose in Wawa and the Big Apple in Brighton, Ontario. The apple is four storeys tall.

Lots of these roadside attractions are very well known. And some of them – not so much. Like the giant Muskoka chair I sat on in Varney Ontario back in the summer.

Generally, these structures give a place some of its identity. It doesn’t always have to be history that makes a place stand out. If there is something historic like the Plains of Abraham in Quebec City, or the scene of the first powered flight in Canada when the Silver Dart took to the air at Baddeck, Nova Scotia in 1909, then that’s a bonus. The cities and towns that are smart enough to blow their own horn about that unique thing that they have, from a natural waterfall to a covered bridge or the forks of a river, seem to gain an economic advantage.

In many respects, my hometown in London, Ontario, Canada, mirrors the other London, the one in England, which is well steeped in history. I have often wondered if my London, with its Thames River and streets like Pall Mall, Piccadilly, Oxford and Wellington should have a small fleet of double decker buses making regular runs in just the core area of the city as a tourist attraction. But maybe that’s just me.

During the time we spent in Kenora there were few donations and not a lot of smiles on the faces of the people. You could feel the tension in the air because of the strike at the pulp and paper mill that was now into its fifth month. I saw a lot of unhappy looking young men driving pick-up trucks. They all looked like they hadn’t shaved in two or three days. They didn’t look like they were enjoying living in this area. They looked like they were just surviving in this area. It wasn’t pretty.

There was something that made me smile though when I passed Husky the Musky heading west.

I thought back to 1995 when Jesse and I were crossing Ontario together. We had started at the Manitoba-Ontario border, heading east, and at the end of our second day on the road we arrived in Kenora. We were just barely getting into a bit of a routine and we were feeling pretty pumped when I pushed Jesse up the hill into Kenora. On the morning of the next day, that ‘we’ve got this figured out’ feeling disappeared in a hurry when turned the corner leaving Kenora and the sign on the Trans-Canada Highway read Sault Ste. Marie 1171 kilometres! That was when reality set in. But looking back on that moment, the memory still made me smile.

My plan was to cross Canada in what I thought would be 275 days – and I had just spent 106 days in province number six. As you can see by the ‘Indiana Jones’ type of map that I have attached, Ontario is a very big place. It’s so big, I couldn’t even get all of northwestern Ontario, including Kenora, to fit onto the map!

The days are now much colder, particularly first thing in the morning. There is a heavy frost almost every morning and it won’t be long before we will have to shut down the motorhome’s on-board water system to prevent freezing. That will mean going back to hauling our drinking water to make tea or coffee and to cook food, in five-gallon containers, the same as we had to do in April in Newfoundland before we could start to use the on-board water system.

Lots of times in London during the winter, people will complain about the snow and cold and yet the people in the far north look at a trip to Thunder Bay or Sault Ste. Marie as going to the banana belt!

The physical challenge of the hills around the top of Lake Superior is now behind me. When you cross the Manitoba-Ontario border there are just two small hills and then Canada flattens our very fast. For the next six weeks there is going to be a mental challenge in crossing the prairies and being able to look 360 degrees to the distant horizon.

On my last day in Ontario we saw the bumper sticker that we voted as the best bumper sticker on the entire journey. It was on the back of little pickup truck and simply said, “If you are opposed to logging – try using plastic toilet paper.” 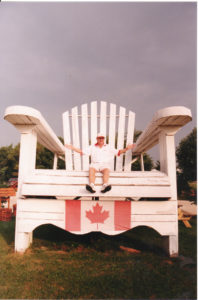 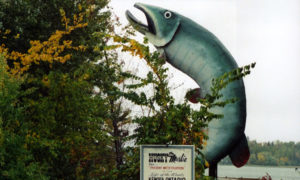