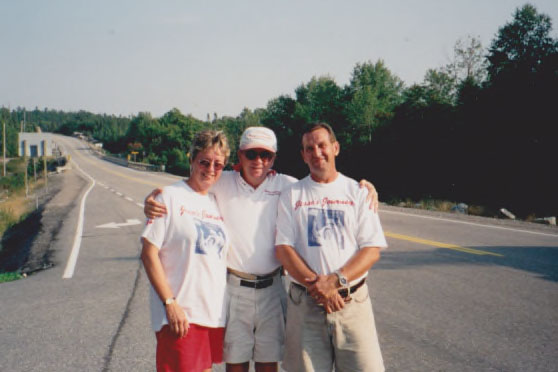 20-years-ago today, I was back on the Trans-Canada Highway, chalking up distance in what is now officially the second half of my attempt to walk across Canada. At the end of the day we are at St. Joseph Island, heading toward Sault Ste. Marie. In all the time I have spent on the road, I have never lost sight of my reason for being on the road – to raise funds for research into a disease that robs parents of their most precious gift – their children.

Completing my 33 kilometres of distance for the day, I head back to where we are staying with the road crew and our volunteers for the week. Looking around the room, it strikes me that all of the people I’m with at this moment are friends of mine who have been a part of Jesse’s Journey since Jesse and I first took to the road in 1995 to make a difference for others.

More important, some of the couples who are here, are people in that unique category where we I can see what love looks like.

If you’re wondering what I’m talking about, ask yourself this question: how many people do I know whose names I say as if they are one person?

There are genuine smiles and laughter as friends find themselves on the road once more, thrown together again for a cause they believe in, more than people can imagine. I’m a very lucky dad to have such great help.

My friends Peter and Ann are back and so are Bob and Joan. These are the people whose names flow off your tongue as one word.

Peter was there in St. John’s, Newfoundland when I set off down the road on April 10th, Jesse’s birthday. Ann was with us through the sweltering heat and some pretty wicked rain and lightning in Quebec. I have a feeling I’ll see them again a little further down the road.

Ron and Fran are here. Ron worked with Terry Fox and coined the phrase ‘Marathon of Hope.’ He’s a great mentor for me.

Bob and Joan are two of the hardest working and quietest volunteers who do whatever it takes to get the job done, and more. A lot more.

On the road, the transport truck drivers have been chatting about us on their CB radios and they seem to always give us a good blast on the air horn, a friendly wave and a wide berth as they pass by on the Trans-Canada Highway.

The sign out front advertises what you can buy – fishing licenses, hunting licenses, firewood, fireworks, movies, bait and ice cream. Somehow seeing the word bait right next to the word ice cream – lowered my desire for the ice cream. Just as well. The road crew are careful with what they want me to eat. There’s not much cheating on a project like this one.

Bob and Joan were with me on the road today. Bob works for the City of London with the sanitation department. When I was a kid we used to call it the garbage truck. Bob calls it the home shopping network.

It’s obvious that Bob wants to keep things clean. All along the road he’s busy picking up bungee cords, bits of clothing and the odd running shoe here and there. He can’t believe how people just throw things out the window. I can’t believe that one man could do so much to keep one country clean. If you are reading this, do Bob a favour. Don’t throw things out the window. We only have one country and we’re all in this together.

It’s been another of those ‘on again – off again’ days for rain gear. My friend Bevin Palmateer is showing our motorhome driver Ed Coxworthy how to work my legs to break up the lactic acid that builds up in the muscles when they get tired.

I’m stretched out on the bed in the back of the motorhome while they work on my legs. I haven’t told anyone on the crew, but I still thinking about this secret thought I have that if I can make it to Winnipeg, I just might have a chance of making it all the way.

The late summer traffic has slowed to a trickle here in the north. On the road we only collected sixty dollars. But at least we tried. 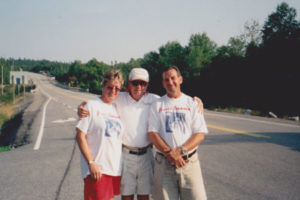 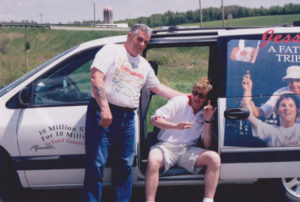