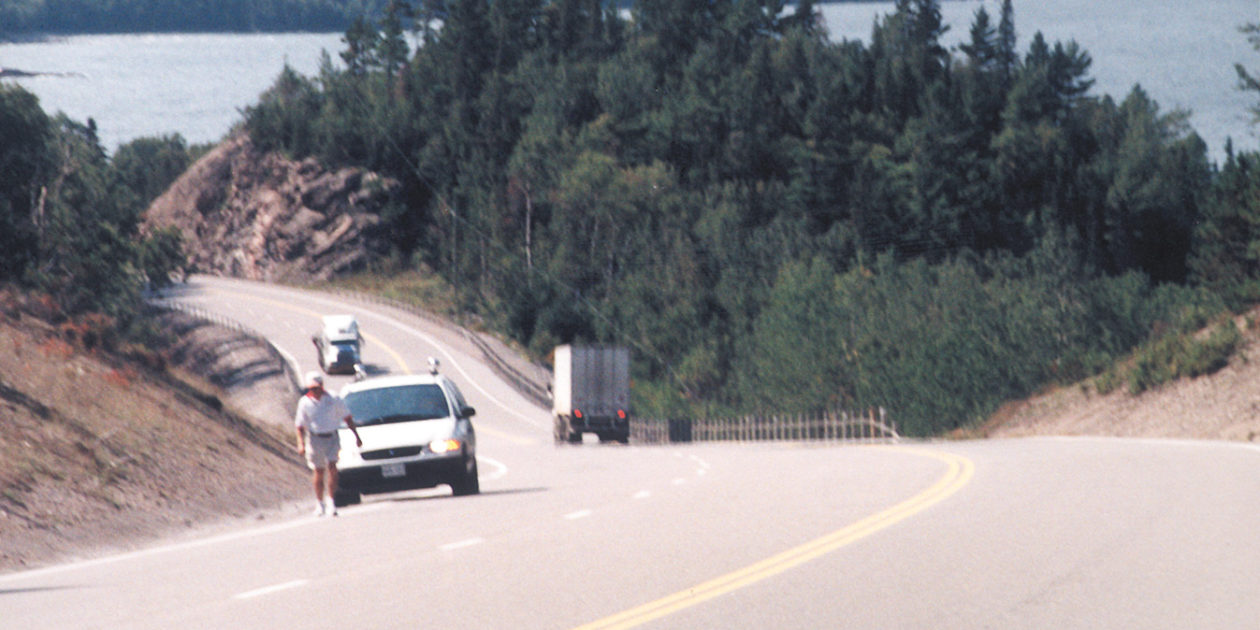 20-years-ago today was a banner day. It was my 145th day on the road, and as we passed through the little town of Massey, Ontario just west of Espanola, we spray painted some numbers on the Trans-Canada Highway. This was officially the half-way mark. I had completed 4,151 kilometres and had another 4,151 kilometres to go.

Heading west toward Sault Ste. Marie, we were anchored for a few days at the Anishinabe Spiritual Centre on Anderson Lake, just south of Espanola.

Jesse and I had stayed here in 1995 when I pushed him across Ontario in his wheelchair.

Thinking back on that time, I remember everyone on the road team wondering ‘what the heck is the Anishinabe Spiritual Centre?’ Some people thought there would be nuns dressed in black with small wooden crosses hanging from their necks and looking a bit like Sally Fields in The Flying Nun. Others thought we would find men in saffron coloured robs with bald heads except for a kind of pony-tail that would stick out from the backs of their heads. When we arrived in 1995 we found Sister Dorothy, Sister Pat and Father Mike couldn’t have looked any more relaxed. They were wearing shorts, running shoes and summer tops.

Little did I know at that time that we had arrived in one of Canada’s hidden gems.

The Anishinabe Spiritual Centre trains lay people to act as shepherds, providing essential spiritual services and leadership in their own communities. Their Ministries Program began in 1981.
The Centre was founded by the Jesuits in English Canada. The Jesuits belong to the Society of Jesus, a Roman Catholic order of priests and brothers founded by St. Ignatius of Loyola in 1540. Both priests and brothers have worked with First Nations people in this region for 169 years, starting in Wikwemikong in 1844.
When I stopped at the Centre 20-years-ago, the saw mill was still there and was still being run by First Nations people who had built the church on the property. The lumber used in making the church came from trees that were felled on the property and milled on the property. To call is a church is a bit of an understatement as the building was erected using mortise and tenon construction dating back hundreds of years. It’s a beautiful structure.

I asked Sister Dorothy, “Who comes here and why?” She told me that people from all walks of life come to rest and renew themselves. Often times they are facing a challenge in life and the Centre provides just the kind of retreat people need in a crisis.

You have to remember that I was asking my questions in 1995.

When I asked how much it cost at that time, Sister Dorothy told me it was fifteen dollars a day. When I looked a bit stunned, she added, “But that does include all your meals.” While Lake Anderson is beautiful and the ideal setting for tranquil renewal, Sister Dorothy said the people at the Centre weren’t really anxious to see cars arriving with beach balls, tennis racquets and water skis.

The other thing I remember about staying there with Jesse was that Sister Pat took Jesse to Bingo one night. Jesse won the jackpot! He gave the money to Jesse’s Journey.

Back on the Trans-Canada Highway we are now heading west toward Spanish, Serpent River, Blind River, Iron Bridge, Thessalon and Bruce Mines on our way to Sault Ste. Marie.

In the mornings, I can now see my breath in the air. This is starting to make me a bit antsy. This is because I have this secret thought in my mind that if I can make Winnipeg, I just might have a shot at making it all the way.

And so it went on both the memory roller-coaster and the highway on day 145. 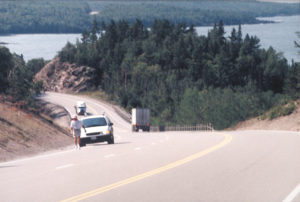