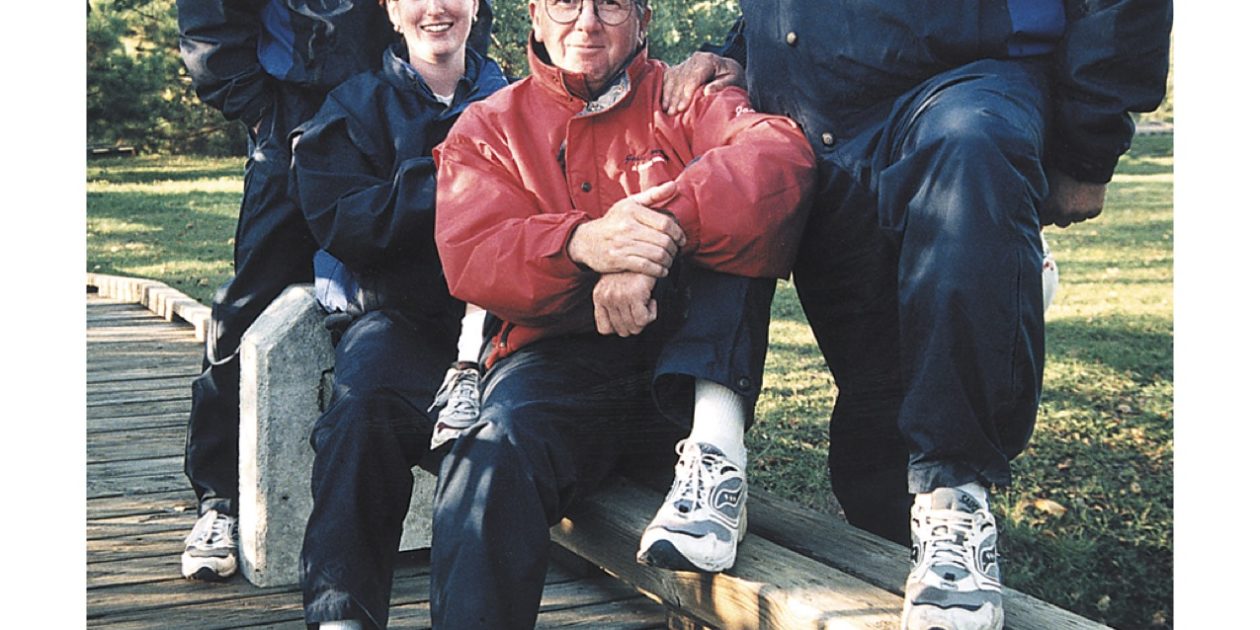 20-years-ago today I was on Highway 69 at Parry Sound. It was my 136th day since starting in St. John’s, Newfoundland and I was back on the road after a setback. This was the week that I hit the wall.

No one ever saw the amount of work that went into keeping me going. The road crew worked my leg muscles three times a day. And at least twice a day I soaked my feet in sea salt water to keep them tough. My friend Ed Coxworthy, our motor home driver said to me, “By the Jesus Johnny, you’ve got feet like pigs’ ears.” Ed always had a way with words.

It was a couple of days earlier in Midland that things went off the rails just for a little while.

Life on the edge of the highway had been incredibly busy all through the towns and villages of midwestern Ontario as we headed north, and I guess I didn’t realize just how much I had been running on fumes since leaving London.

At breakfast time on board the motor home I was very sluggish and for Ed Coxworthy who had always gone the extra distance in taking care of me, this was small red-flag. Out on the road I was having difficulty keeping directions straight in my mind. That was when the road crew pulled the plug after just six kilometres.
I was taken back to the motel in Midland where the road crew blacked out the windows, gave me a set of ear-plugs, disconnected the phone and left me alone. I slept soundly for six hours. When I woke up I was ready to go, and we were back in business.

There were four of us in the permanent road crew, Trish Federkow, Ed Coxworthy, Bevin Palmateer and me. The ‘blackout’ in Midland made me even more aware of how dedicated the crew was to seeing that I kept moving along the highway. My only job was to cover 33 kilometres of distance every day. The crew looked after everything else.
I never had to plan a meal, I never had money with me, I never did the laundry and I never drove anywhere. The crew looked after everything, and everything is a very long list of stuff.

The summer traffic was very heavy on Highway 69 which is a very dangerous piece of road. I had cautioned the road crew and the volunteers who were with us for the week to be very careful as there had been two fatal accidents in the area in the past 48 hours. The night before a woman had been killed when her car collided head on with a transport truck. Our OPP escort was also nervous about a couple of near misses we had experienced. Things looked fairly normal and everything had been cleared away when we reached the scene of the previous night’s fatal crash. No one spoke, and everything was very quiet when we passed that scorched piece of asphalt with bits of metal and broken glass.

The heat and humidity came back as we made our way north to Point au Baril, Britt, Frenchman’s River and Estaire on route to Sudbury.

There was a lot of horn honking and people cheering us from cars, trucks, vans and motor homes heading both north and south.

My journal notes reflect how the days were a swirl of barbeques, cheque presentations from service clubs who had helped along the road, from banks that made donations and people who just wanted to do the right thing.

• There was the man with two stainless steel knees who joined me for a few steps. I slowed down to let him have his moment as a part of “Jesse’s Journey.” He was beaming with pride.

• A very proud dad in his pickup truck who pulled to the side of the road, so his son could donate two weeks’ worth of allowance.

• There was a couple from Ingersoll who stopped to donate, and the man said to me, “It’s a very courageous thing you are doing.” I felt I was just doing what dads are supposed to do. Do everything you can to help your children.

• There was a man in a Mercedes who yelled out his car window, “Go for it man!”

• And there was a man wearing a Satan’s Choice tee shirt who stopped his motorcycle on the opposite side of the highway and walked across the road. He made a donation and then turned and walked back across the highway. He never said a word to me.

And there were some funny moments.

One day during our afternoon fruit-and-tea break, Ed Coxworthy noted the huge number of cars and trucks that were trailering motor boats. Putting it into perspective, Ed said, “By the Jesus Johnny there’s more motor boats being driven around in Ontario than there are in the water.”

When we were leaving Midland we had to wait for a few minutes for our OPP escort to arrive, so Ed and I climbed the stairs to go inside the Martyrs Shrine. I hadn’t been there since I was 12 or 13 years old when we used to vacation in Midland. When I was a kid I remembered they had long wooden matches, like the kind you would use to light a natural fireplace. You used to be able to use these matches to light your candle contained in a red glass cylinder. A lot of the inside of the Martyrs Shrine is crafted in wood, and wood and fire are not a good combination. The matches have been replaced by small electrical switches that ‘light’ your candle.

Ed put a donation in the box and flicked his switch. Nothing happened. His candle didn’t turn on. He glanced over at me with a look that said, ‘what happened?’

When we got outside Ed told me his plan. Maybe, because it was the Martyrs Shrine he left out the ‘By the Jesus’ line. He just said “That’s it Johnny. I’m going to write to Rome. I’m sending a letter to the Pope to tell him he owes me ten bucks.” 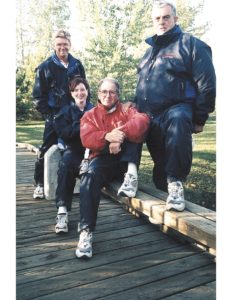