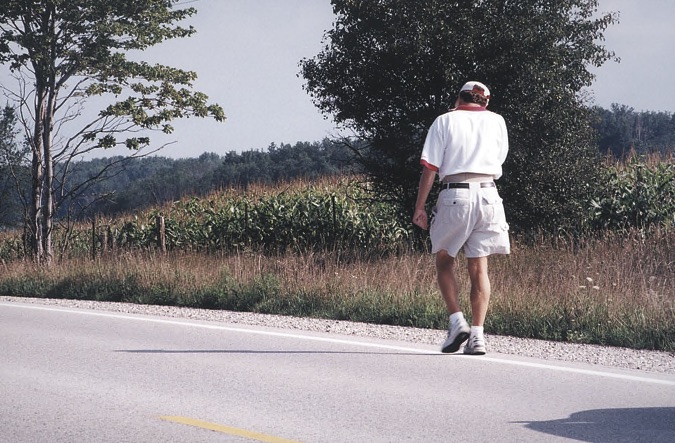 20-years-ago today I was on Highway Six and passing through Mount Forest as we pushed on toward the cottage country of Muskoka. I thought it would become quieter along the road after shaking so many hands in southwestern Ontario. I couldn’t have been more wrong.

We were heading toward Collingwood and saying goodbye to southern Ontario. Sometimes early in the morning when it was still cool as I walked alongside hundreds of corn fields that were getting close to harvest, there was just a slight whiff of fall in the air.

It hadn’t sunk in yet that it was a week when I was going to have to say a goodbye. I had no idea how difficult that was going to be.

There are times in a massive project like this when you find yourself all alone on the highway. And you feel all alone – but you can’t share that with the road team. This is when you are the one who really has to haul the freight. This is when you really know that this whole thing was your idea. And no matter how good the team is that surrounds you, you realize that you have to be the strongest and most dedicated player on the team. You have to be the strongest link in the chain.

And through it all I was determined to smile and let my confidence show. Even though on the inside I felt like crying.

Most of the time the sun was shining, and it was warm.
And whenever those short summer showers popped up, there was always a rainbow.

In the past few days we’d had some tense moments along a pretty bad stretch of highway when things got very dicey with a couple of transport trucks and cars that could have ended very badly.

But the pictures that really stuck in mind were the ones that stuck in my heart.

There was the man from Palmerston who organizes the Terry Fox run in that area. He came out to walk with me and shared his story about his daughter who was diagnosed with cancer at one month old and died when she was one year old. I did what I could to offer comfort and encouragement. Like I said, sometimes it was hard to keep a smile.

There was a little girl in a bright green dress in a stroller on the opposite side of the highway. She had suffered brain damage and her mom and grandmother brought her out to the road to see our little parade passing by. I crossed the road to say hello and to thank them for coming out and making a donation. They smiled, and they cried. Sometimes it was hard to keep a smile.

On another almost fall like day on the outskirts of Durham there was a young man of 25 or 30-years-old in a wheelchair who was glad I stopped to say talk with him.. After climbing a pretty big hill in the Beaver Valley there was an older man in a wheelchair at the side of the road. His name was Donnie and I think he may have suffered a stroke. He cried when I turned to leave. Sometimes it was hard to keep smiling.

Near the end of the day at the junction of one of those county roads we pass all the time in our cars, there was an older lady with a straw hat and two canes who had been waiting for us for most of the day. In the late day sun when the shadows were starting to get long, she climbed down from the huge hay bale she had been sitting on and came over to give me a hug. All she said was “Your good stuff.” Every once in a while as the rainbows came and went on the emotional roller coaster – it was a little easier to smile.

There were very few really, really hard days on the road but Collingwood, Ontario was a tough day.

You see, when we were approaching London Jesse was able to come out to the road and be with me. Having him there and seeing people’s response gave me a tremendous lift.

As we moved north from London, Jesse again came out to be with us. But each day the distance from London became longer and longer.

Collingwood was the end of the line. With five more months of highway ahead of me, I knew he wouldn’t be coming tomorrow. This was it.

I smiled as I gave Jesse a hug and thanked him for all the time we had shared on the highway. And then I said goodbye. I knew I wouldn’t see him again for five more months and I really wasn’t sure if I would ever see him again.

I remember sitting on the edge of the bed in the back of the motorhome. I was all alone and I was almost in tears.
My friend Ed Coxworthy, our motorhome driver, knew something was wrong.

He put that big rough hand of his on my shoulder and I can still hear him saying. “Don’t worry Johnny. We’ll make it. And when we do, whether we make ten dollars or ten million dollars, they can never take that away from you.” He helped me make it through a tough day. I even managed a smile.

Who is there who helps lighten the load for you? And perhaps more important, who are you helping to lighten their load? Maybe you should look around to see who needs a smile. 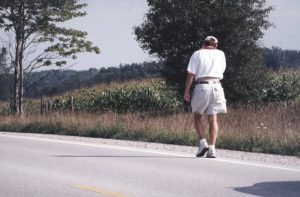