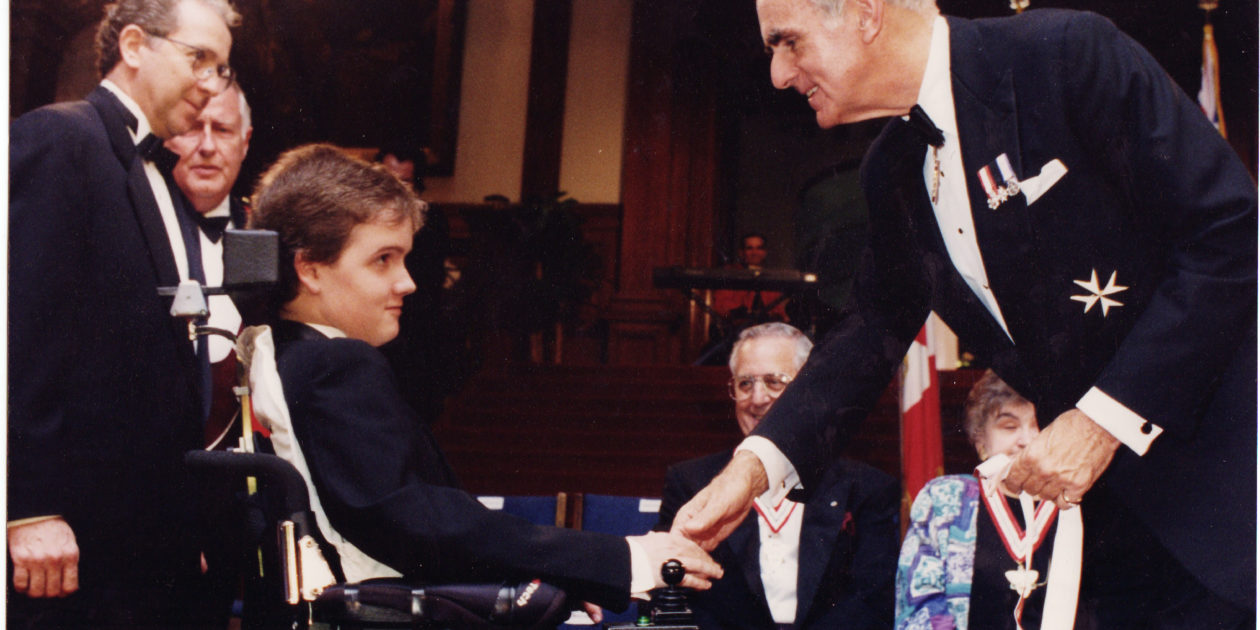 20-years-ago today – I experienced another flashback. It was my 115th day on the road and we had reached Toronto.

Maybe it was the heat of summer that had my mind take me back to two moments that will be with me as long as I live.

The first was to 1995 when I pushed Jesse across Ontario in his wheelchair. It was in Toronto that we circled the bases at what was then called the ‘Skydome.’

As I pushed Jesse around the bases his story of courage and determination was flashed on the Jumbo-tron in centre field. Later that year we were at centre ice at Maple Leaf Gardens for the ceremonial puck drop as Toronto marked the opening of another hockey season. I’ll always remember Leafs Captain, Doug Gilmour, leaning in for the face-off and saying to us, “You guys are doing a really good thing.”

The second flashback also involved Toronto and was one of the proudest days of my life. It was at the Ontario Legislature at Queens Park in 1997 that I saw Jesse receive the Order of Ontario. Jesse had won a lot of hearts and done a remarkable job in making Canada aware of the need for research in the field of Duchenne muscular dystrophy, a disease for which there is no cure.

Most people are unaware that Duchenne affects boys almost exclusively. While research is making solid advances and I am very optimistic about the future, at this writing, we still do not have a survivor. Jesse’s Journey is all about changing that and if you are reading this posting, I hope you’ll visit www.jessesjourney.com It’s never too late become a member of the ‘journey’ family and make a contribution to something that is making a difference for all those young boys who show us every day what real courage is all about.

Toronto was a bit of a blur as I made my way across Canada in 1998 with cameras and microphones from every network giving us blanket coverage along with reporters from all the major newspapers. There was an opportunity to speak to Toronto city council and to share a microphone with Toronto Blue Jays play-by-play anchor, the late Tom Cheek and his broadcast partner Jerry Howarth, both of whom were very gracious.

In the steel canyons of downtown Toronto there was an elevator ride to the executive suite and an opportunity to deliver a speech to senior officials at the Royal Bank. That evening at Skydome, three Duchenne moms from Oshawa, who had spent night after night after night in a smoky bingo hall, presented Jesse’s Journey with a cheque for $60,000. That is what real philanthropy is all about.

On the streets of Toronto I shook hands with hundreds of people. There were people applauding and there were people in tears and I remember there was the man who got out of his car with no shirt on who shook my hand and said, “You’re making us all proud to be Canadian.” Some days it was just too much.

Back on the road, as I was leaving Toronto with a lot of horn honking along the road, I saw a little boy on the sidewalk in a wheelchair. His chest was in a brace support to keep his spine straight. He had really thin arms and a really big smile. He told me he was in grade two. When I asked him what he wanted to be, he stood as straight as he could, and said to me, “I want to be a professional wrestler!” It was all I could do to give him a kiss on the top of his head and say good-bye. He was a really neat kid.

It made me wonder how some people who are at such a disadvantage have such determination. I don’t know what brought that little boy and me together on that sidewalk that day – but it made my day! 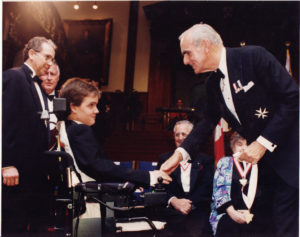