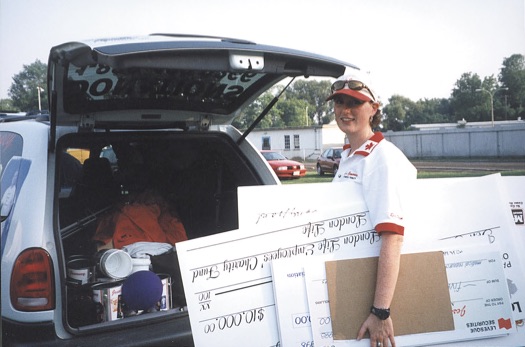 20-years-ago today I was passing by CFB Trenton, east of Toronto.

As our little cavalcade moved along the steel fence that separated the highway from the military base, we could hear the constant roar of giant cargo planes, all painted military green, as they lifted into the air. We could also hear the sound of a large group of young cadets marching in loose formation on the other side if the fence applauding and yelling words of support as Jesse’s Journey continued to head west.

As I waved to say ‘thanks’ to the cadets, I thought about the many different people who had come to the side of the road to support Jesse’s Journey and just how they got there.

I was really just lucky enough to have the good fortune of being able at the front of the parade a couple of times.

Most people probably don’t realize the size of the team that is required to keep a project like ours moving forward every day.

We actually had two teams. They were appropriately called the Road Team and the Home Team. And both of these teams were managed by women.

On the road, Trish Federkow, who was with us 1995 when I pushed Jesse across Ontario, took charge of the road crew and the road volunteers who usually joined us on a Saturday. The volunteers they were replacing usually left on a Sunday. The new volunteers couldn’t understand why the people they were replacing were often in tears and didn’t want to leave. They would soon find out why.

The new volunteers often looked like they were wondering what they had gotten themselves into. They had less than 24 hours to learn the routine which consisted of a lot of things. Often times they replaced the OPP or RCMP in the monotonous job of driving right behind me at 5 miles per hour. Rule #1 was: do not run over John.

The other things they had to learn in a hurry involved charging lots of walkie-talkie batteries every night, making sure gas and oil levels were always ready to go, seeing that there was plenty of cold water on board the mini vans along with sun screen, clean dry clothing (especially socks) and things like fresh fruit and juice. Staying hydrated was very important. They were also the eyes constantly checking the mirrors and watching behind us because in many parts of Canada there are lots of “wide load” vehicles. That meant I had to move further off the road to be safe whenever these monster trucks came up behind us. Luckily, with CB radios at that time, the trucking world always seemed to know where we were on the highway.

The volunteers also took charge of doing the laundry, making peanut butter and jam sandwiches, collecting money along the road, spray painting the road at the end of the day to mark our start point for the next morning and shuttling people either backward or forward to wherever we were spending the night. Trish was in charge of this group as well as doing the banking and liaising with the home team.

In London, Maureen Golovchenko was in charge of the Home Team. That team looked after finding places for us to stay in advance of our arrival, dealing with media requests and setting up interviews that were often done from the side of the road as we moved along. The team in London also looked after things like signage, sponsorship and co-ordinating events with service clubs, businesses and many other groups who wanted to host us along the road. And most important, every week they looked after co-ordinating and sending us some the best volunteers Canada has ever seen. They were the ones who, after a week on the road in a life-changing experience, were misty eyed and didn’t want to go home. It was “Moe” and the Home Team that paved the way for me to complete 33 kilometres a day, day after day after day.

It must seem like it was a dull and boring routine – and lots of times it was – but none of us ever lost our focus. Everybody on the Road Team and the Home Team was committed to what they were doing – raising money for research so that a day would come when those boys who never played on a hockey team or a baseball team would be able to what I was doing. They would be able to walk. 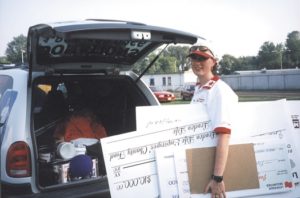 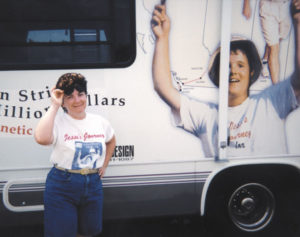