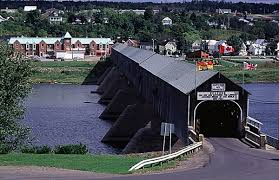 20-years-ago today I was in Perth-Andover, New Brunswick alongside the St. John River heading toward Quebec and province number five.

Along the Trans-Canada I could hear gunfire through the trees as we passed CFB Gagetown. I just assumed the shots were coming from the practice range and that they weren’t aimed toward the highway!

There were lots of huge canvas covered military green trucks with big knobby tires that passed us as they growled along the highway along with lots of small green jeeps with huge radio aerials whipping back and forth.

I was walking the Trans Canada with my friend Bevin Palmateer and said to him, “Bevin, there goes Canada’s army.” Just as I said that another huge canvas covered truck went by with a canoe sticking out the back. I looked at the canoe and then looked at Bevin and quickly added, “and Navy.”

One of the prettiest little towns we stopped in along the road was Florenceville, New Brunswick, which is on both sides of the St. John river. It used to be two little villages called Buttermilk Creek and Cornsilk Flats. It was renamed Florenceville after Florence Nightingale who cared for British soldiers in Turkey during the Crimean war.

No disrespect to Florence Nightingale but I liked the original names better.

We also passed the world’s longest covered bridge in Hartland, New Brunswick. The story is that you are supposed to make a wish before entering the bridge and then hold your breath from one end of the bridge to the other. Supposedly if you hold your breath the entire time your wish will come true. The bridge, which was built in 1901 is 1282 feet (391 metres) from end to end. I didn’t make it. I think that if I had held my breath for that long, I would have been wishing for a doctor! 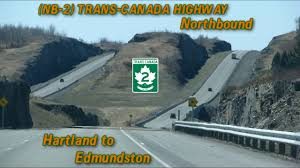