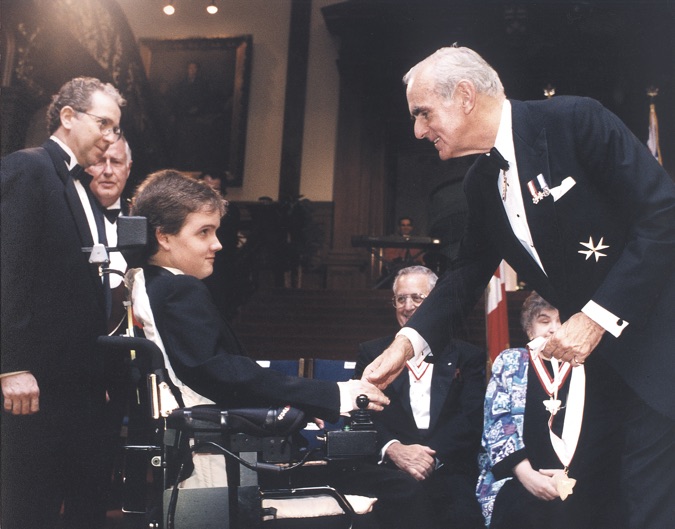 (Ed’s note: This is my final posting from our last 30-days on the road in 1995. A lot has happened in the 25-years since I pushed Jesse across Ontario in his wheelchair. In today’s story I want to share a little bit about what has happened since those early days Jesse and I spent on the edge of the highway. I’d like you to know that it’s never too late to become a part of the ‘journey family.’

Over the years, Jesse’s Journey has grown as we have followed the light that Jesse shone into what was a vast darkness in Duchenne Muscular Dystrophy research. It was Jesse who showed us the way.

I thank you for taking the time to follow our progress and for sharing our story with others.)

Our final day on the road got off to a somewhat typical start as two of our escort vehicles got lost! It cost us about 15 minutes, but somehow losing a bit of time today wasn’t as critical as all the other days on the road.

When everyone was assembled at the start point, there were two police motorcycles, two fire trucks, the motor home, the “Old Time Rock and Roll Music” van, our two escort vans and vehicles from various news outlets.

It was a wet morning and there was quite a crowd of people, including another Duchenne family from London, a mom and dad and a son and daughter, who drove all the way to Ottawa just to be here on this day.

And just as I was about to start pushing Jesse along the road for the last time, I got the surprise of a lifetime.

Thirty-three people from the television station in London jumped up from their hiding places behind parked cars. After the shock wave of surprise passed over me, then there was a great wave of emotion and I almost lost it right there on the road.

As we headed toward Parliament Hill there was a lot of honking and waving and the familiar faces of a lot of people who had travelled a long way to be here for the finish.

I had decided earlier that this is the moment to ask each of those people who have helped in so many ways, to come and take a turn pushing Jesse. Just to keep it honest, I never took my hand off the wheelchair.

Somewhere along the road though Ottawa I was pushing the wheelchair up a hill when I leaned forward and said to Jesse, “Jess, I think this might be the very last hill.” He smiled.

In downtown Ottawa we were joined by the Shriners band and even more Shriners in their funny little miniature cars who were driving circles around the policemen who are standing and directing traffic at each intersection we passed.

The cops just smiled. They were laughing and having fun. I don’t think they get to do that every day.

As we came up Metcalfe Street, looking straight ahead at the Peace Tower, the entire Liberal caucus was there on the corner to greet us, and in that group was John Gerrard, Canada’s Secretary of State for Science.

120 days ago, on that windy, snowy and cold morning in May when I began pushing Jesse across Ontario, John Gerrard left the warmth of his home and drove more than a hundred kilometres from Winnipeg to be there with us on day one at the Ontario-Manitoba border. He told me that morning that he would be there to walk the last kilometre with me, and there he was waiting to help push Jesse on that final day. I guess some politicians do keep their promises.

As the MP’s took their turns pushing Jesse, I still kept my hand in place on my familiar grip on the back of the wheelchair.

As we passed the National Art Gallery, the picture that we had been dreaming about seeing, the Alexandra Bridge, slowly emerged right in front of us. Somehow, I couldn’t believe we were really here.

With a huge crowd of family, friends, volunteers and supporters from all walks of life cheering us on, I began pushing Jesse the last couple of hundred metres toward the finish line. Halfway across the bridge the people behind us stopped and let Jesse and I go on alone—the way we had started.

When we could see the banner we were about to break through, I stopped and turned Jesse’s wheelchair around and held up his arm so he could wave his Canadian flag one last time and say thank you to everyone who was there.

Then we turned and as I pushed Jesse forward, we broke through the banner that was being held by two members of the RCMP, in their red uniforms. I learned later that one of those Mounties had lost his son two years earlier.

When we broke through the banner, the cameras were clicking as I hugged Jesse and told him that I loved him. Then I looked up for Sherene and Tyler and Tim. We had a family hug. That was when I knew that I was everything was going to be OK.

I remember looking through the crowd and seeing two of my friends from work, Rose and Perry with tears in their eyes. (Ed’s note: Perry Esler is now the Executive Director at Jesse’s Journey.)

There was a flurry of things that happened in the minutes after we broke through the banner. There was a greeting from the Prime Minister and Jesse was given a Canadian flag that had flown from the Peace Tower on Parliament Hill.

I remember thanking Tim and Tyler and Sherene. Then I knelt down to eye level with Jesse and thanked him for all he had done and for all that he had persevered through.

And just like that it was over. We had done our best to give people hope.

In the years that followed that final day in Ottawa, Jesse’s Journey we went down its share of dead-end roads when it came to funding research. But we never gave up.

Jesse’s Journey is now Canada’s largest funder of research in Duchenne Muscular Dystrophy. We are funding projects across Canada as well as projects in The United States, The United Kingdom, Italy, Holland and Japan—and it all began because a father and son wanted to make a difference. And better still, people believed in them.

Looking back on our journey across Ontario, Jesse was 15-years-old throughout the entire time we were on the road. But in a way, it was like I left home with a 14-year-old and came home with a 16-year-old with clearly defined goals, genuine caring for others and a sense of humour.

I think that our children – boys and girls— make us very proud of them when they show us the things they are willing to do, their courage and their confidence in themselves and their willingness to help others.

Jesse went on to recognized as a high achiever in high school. He served as President of his Junior Achievement company. He graduated from college and he was asked to be one of the torch bearers for the 2010 Olympic Games in Vancouver. Jesse met and spoke with Queen Elizabeth II and he was named a member of the Order of Ontario.

But perhaps more than anything, he showed disabled people that you can do things if you set your mind to it. You can get out there in the world, go to school and to work, and play a meaningful role in society.

Jesse did not live to see our dream of a cure fulfilled. He died in November of 2009. He was 29-years-old.

And yet through it all, when I look back at Jesse’s life and how mature he was through all that he endured and tried to do – somehow in my mind, he is still one of ‘my little boys.’ 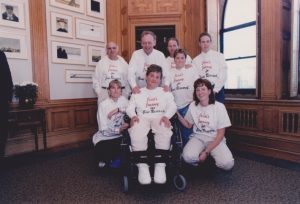 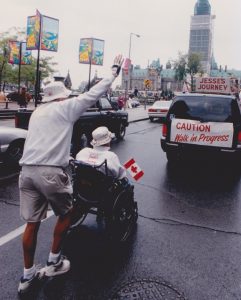