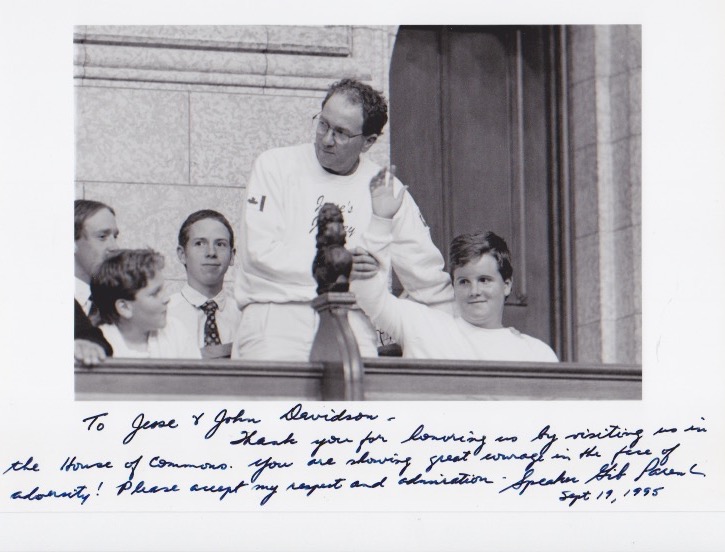 After getting some much-needed sleep following the excitement of being at centre ice for the Leafs-Senators game last night, Jesse and I have to thank the volunteers who coordinated our exact route on the road. The way the route has been laid out, we have already completed almost all of our journey with the exception of getting through Ottawa and across the Alexandra Bridge which is just behind the Parliament buildings and links Ontario to Quebec.

Crossing the bridge tomorrow will complete the spanning of Ontario from the Manitoba border to the Quebec border. That means we have a very limited amount of road distance to complete today, in order to accommodate other activities and still keep our overall distance correct.

After doing a couple of ‘on the road’ television interviews with Global and CTV we were loaded up and taken to the Governor General’s residence at Rideau Hall. (Romeo LeBlanc was Governor General of Canada at this time, the first Atlantic Governor General.) When we reached the gates at Rideau Hall, my old friend Dave Meadows from Halifax was waiting for us along with his young son Jason.
We were given a tour of Rideau Hall and Jesse was presented with a newly minted silver medallion. Canada mints a new medallion for each Governor General and this was the first of the new medallions to be presented. From Rideau Hall we left for Parliament Hill and the House of Commons, where we had lunch with London Members of Parliament, Sue Barnes, Pat O’brien and Joe Fontana, before doing an interview with CBC Newsworld.

We then had to hurry to get ourselves into place in the gallery at the House of Commons for Question Period, where we were recognized with a standing ovation from all the members of parliament. (Ed’s note: I think it’s important to note here that members of all parties were united in recognizing Jesse’s efforts to advance research. It should also be noted that this happened just six weeks before the Quebec Referendum that almost saw Canada torn apart. We should never forget how close that vote was.)

Question Period was followed by a private meeting with Prime Minister Jean Chretien, who allowed the media into his inner office. There were lots of pictures taken and the Prime Minister put on a Jesse’s Journey tee shirt and took Jesse for a run, pushing him down the corridor as the media followed him with TV cameras recording the moment and still photographers’ cameras clicking at a great rate. When they came back to the office, Jesse was laughing and said to me, “My gosh dad, he goes faster than you do!” It was all pretty special.

(Ed’s note–again: I apologize for the length of this posting but on the morning that I am writing this, I have just read in the Globe and Mail that Aline Chretien, the wife of the former Prime Minister has died of Alzheimer’s at the age of 84.

I mention this because she and I met in a strange way.

The House of Commons is an old building and it was not designed for people in wheelchairs. Getting Jesse into the public gallery was complicated. After getting to the upper level, where the gallery is located, and navigating our way along a narrow hallway with some steps that went up and some steps that went down, Sean and I then had to lift Jesse out of his wheelchair and carry him through a narrow doorway to get him seated. As Sean and I worked together in lifting Jesse, I was backing up when I accidentally stepped on the foot of a very nice lady in a smartly appointed matching brown jacket and skirt. She had been holding the door open for us and despite the fact I had just stepped on her foot, she had a lovely smile. I immediately apologized and she just kept her same warm smile and said there was no need to apologize.

I felt rather sheepish, but not completely embarrassed. Somehow this was one of the ‘only in Canada’ moments. I smiled back.)

After the photo opportunity, we toured the Canadian Senate and its incredible library. We did an interview with Global TV before heading back to our hotel where there is an almost party-like atmosphere as everyone is well aware that tomorrow is the final day.

When I arrived for dinner, I was wearing a casual shirt and slacks. It’s the first time in five months that our road team and volunteers have seen me in something other than our road gear outfit of journey shirt, shorts and running shoes. Tomorrow will be the last day for Jesse and me and our wonderful team of volunteers to put on our road gear that has become our trademark.

I wrote my journal after spending time with, and doing my best to thank, all of the people on the Jesse’s Journey team who have worked so hard, and been with us for so long, to bring us to this moment—the evening before our last day on the road.

There are lots of thoughts in my head tonight. And they are all swirling around.

I hope we have done something meaningful to help advance research for all those boys who are just like Jesse.
Just one more day to go. 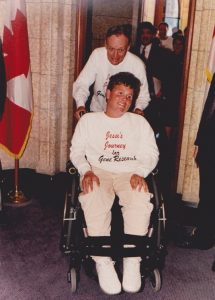