We seemed to have a little more zip when we met our police escort this morning as Jesse put on his hat and I began pushing him along the road leading to Carleton Place. Ottawa is getting closer.

One of the first people to make a donation is a man and his two little girls who are in a pickup truck. The man has a day’s growth of beard and after pulling to the side of the road, he walked back to meet Jesse. He said, “Jesse, I’m not a rich man but I like to give what I can.” And then he turned and walked back to his pickup truck. It was kind of special.

Later in the morning, another man stopped to shake hands. He asked Jesse, “What do you want to be when you get older?” Jesse said, “I’m not sure” and the man said to Jesse, “Neither do I Jesse, and I’m 58-years-old!”

The man then shook hands with me and said, “You’re a lucky man” and I looked at him and said, “I know.”

When we pushed on down the road there was a lot of recognition from people in cars and trucks and vans and a lot of people stopped to make a donation.

In the afternoon, CBC television joined us on the road to do a “walking” interview as I pushed Jesse. We stopped for lunch and had lasagna and some of Pat Meadows butter tarts. By late afternoon as we are getting closer to Ottawa, more family members are starting to arrive for the finish. My mom and dad and my sister have all joined the team.

In Carleton Place, the mayor gave Jesse some hats and pins and we did some more newspaper and television interviews before getting back on the road to complete our distance for the day.

After dinner we watched the Simpsons to find out ‘who shot Mr. Burns?’

There was a meeting to confirm police arrangement for the next day and the rundown of who is going to be where, along with the checklist of everything we will need on the road in the morning. The weather is looking like it’s going to be wet, so that means the vans will need to be stocked with dry clothing, dry socks and changes of shoes. 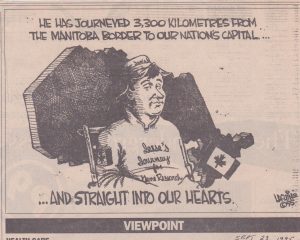