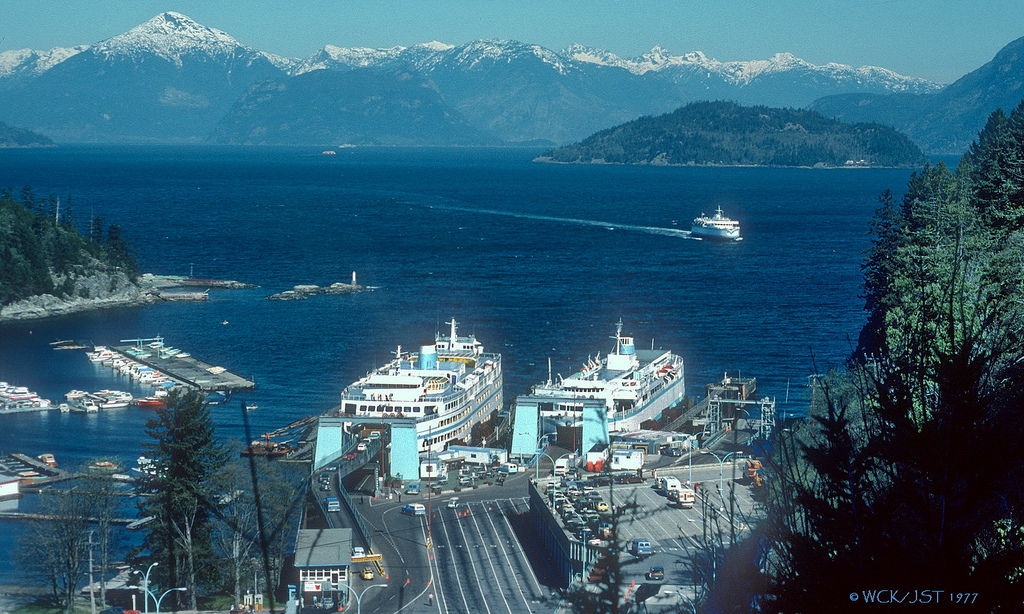 20-years-ago this week, I ran out of mainland Canada.

It happened at Horse Shoe Bay in West Vancouver with the towering Coast Mountains as the backdrop to the B.C. ferry terminal, where we would make the crossing to Vancouver Island.

It was funny. I just walked across the grass and onto the dock and suddenly it hit me, that we had made it across Newfoundland and the mainland. All that remained were the days it would take to walk down the island from Nanaimo to Victoria.

It had been a chaotic week and emotions were constantly being tugged in different directions. The enormity of what we were close to completing was beginning to sink in.

Information was still coming at me and we still had work to do, and at the same time I was starting to feel emotionally overwhelmed.

These last few days were a blur of well-wishers, a crush of media, flashing lights on police cruisers, glimpses of the life I had come to know on the motor home, people making donations, signing city guest books, honking horns, clapping hands and finally re-uniting with my family.

So many people. So many very good people. How could I ever thank them all?

The week began east of Vancouver in Port Coquitlam, Terry Fox’s home town, where we received a wonderfully warm welcome at an outdoor gathering at the town square. Terry’s brother Fred, a quiet and soft-spoken man, was in the crowd. I appreciated him being there and having a chance to speak with him privately. Although he was never on the road with us, somehow, I felt that Fred more than others, understood some of the struggles we had been through. Struggles the public didn’t see.

It was one of the first days where we really felt the gentle climate of B.C.’s lower mainland, the kind of day that people in eastern Canada envy in January. The sun was shining and while there was snow on the ground the sidewalks and roads were clear and dry.

Dressed in their green high school sweaters there was a choir of girls and boys from Port Coquitlam that sang for us. It was wonderful to hear the voices of these kids who were about Jesse’s age. The mayor gave me the key to the city, and there were kids of all ages there, and lots of them had brought their autograph books.

I remember meeting two little girls, who were probably eleven or twelve years old. They had been shoveling the snow from their neighbors sidewalks for the past two weeks to help Jesse’s Journey. I’ll always remember that  donation of $42 from two little girls on the other side of the country who had never met Jesse. To this day, I still remember that moment.

(It’s worth reminding readers here that we were crossing Canada without a website. We were just into 1999, a time before people had websites and e-mail was still in its infancy. Somewhere between 1996 and 2001, Internet usage went from being a relative rarity to what we might now call normalized, depending on how you want to define popular.)

At the end of the reception in Port Coqiutlam, the choir sang “Oh Canada” and everyone joined in the singing. It was one of the few times this happened on the journey, and it was a very proud moment.

The next day, the rain that the people of B.C call “liquid sunshine” was back. Walking in the spray of water from the tires of the traffic right beside us, there were honking horns and people yelling encouragement as hundreds of cars and trucks slowed to make donations, as we moved along the road. The traffic chaos as we approached Vancouver really slowed us down. It was dark and raining steadily as we passed through Port Moody and Burnaby. In the downpour several police cars escorted us across the Second Narrows bridge to North Vancouver.

In the dark and rain, the flashing red lights took on a kaleidoscope look as reflections bounced in all directions from the wet pavement.

While we were struggling in the rain and dark, our motor home driver Ed Coxworthy faced another challenge. With the windshield wipers working at full speed, he was battling Friday night traffic in maneuvering the motor home across the Lions Gate bridge and into Vancouver.

As we rolled to a stop in the parking lot of the Bayshore Inn on Vancouver’s waterfront and I stepped down onto the pavement, I heard the first of the voices I had been waiting months to hear.

It was Jesse calling “Hey Dad!” from a balcony just above me and in a few minutes, we were all hugging in the parking lot. I felt elated to be holding Sherene in my arms and to be with the family I hadn’t seen since August of the previous year.

When we left Vancouver and returned to the road for the last time on the mainland, the sun was shining, and it felt warm. Sometimes I stopped for a drink of spring water running from the natural ice walls that had formed on the rock along the side of the road.

There were still a lot of cameras and microphones as I pushed on to Horse Shoe Bay. I was overjoyed as I walked on, playing over and over in my mind the pictures of thousands of random acts of kindness we had seen from average Canadians all across the country.

Soon, we would all be going home.

(PS: If I have written a lot about our motor home driver, Ed Coxworthy, who we nicknamed “The King of Newfoundland,” there’s a reason for that. Ed had given me almost a year of his life at no charge. And, we had shared the highs and lows on the road. Ed did all that he did for Jesse’s Journey at a time when his own daughter was fighting cancer, a fight she would eventually lose. Friends like that are hard to find.) 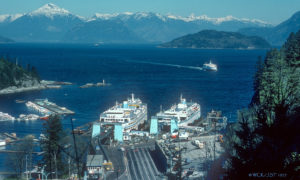 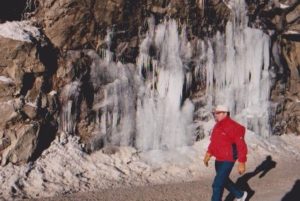