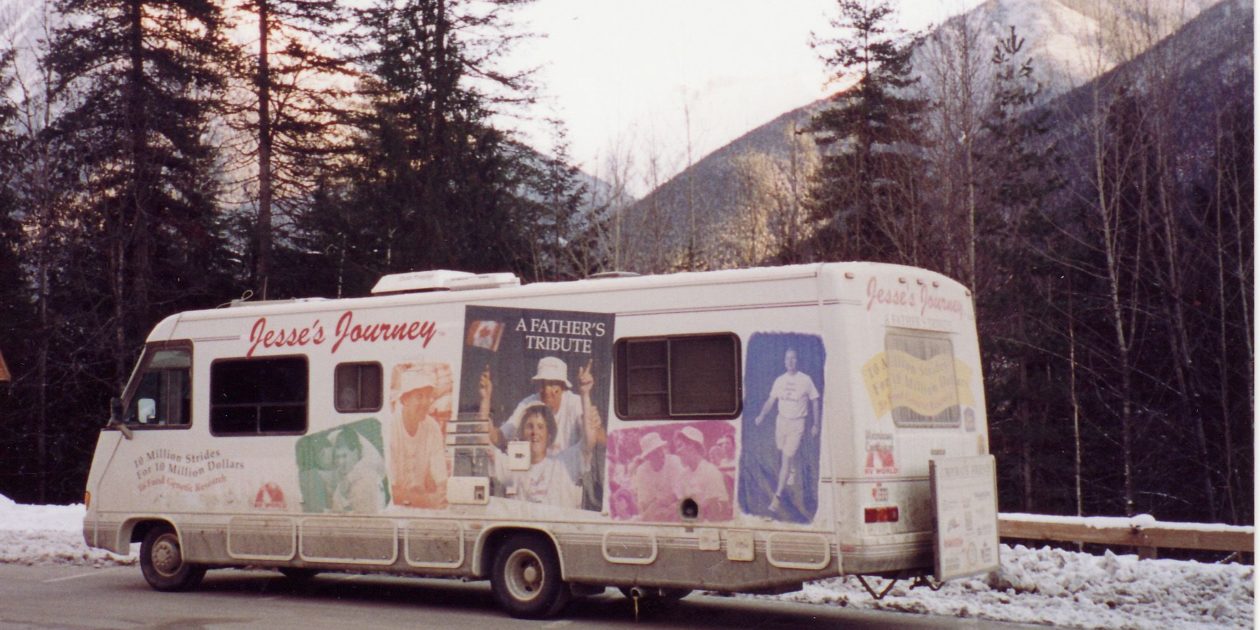 20-years-ago today I ended my day in Mission, British Columbia, on the north bank of the Fraser River, 80 kilometres east of Vancouver.

We are down and out of the mountains after an incredible week of contrasts, as the road portion of this life journey is nearing its end. I’m looking back in my mind at the last ten months on the road. At the same time I’m slowly starting to think about going home and what comes next in my life.

The past week has seen an incredible amount of contrast. A few days ago we were still in the mountains at Manning Park, British Columbia and the snow drifts at the side of the road were 12 to 15 feet high. A couple of days later we were in Hope, B.C. where there was almost no snow. It was in Hope that the road crew had a surprise for me.

I didn’t keep an accurate running count of our total mileage in my journal, so I didn’t know exactly when we reached the 8,000-kilometre mark. Some of the road crew (who kept an accurate record of our exact mileage) went searching for a cake to mark the occasion. When they walked into a bakeshop in Hope, the magic that seemed to follow Jesse’s Journey showed up again.

But, for a moment,  it looked like there wasn’t going to be a celebration. The cakes had all been sold and the store was ready to close for the day. But the owner of the shop, who had noticed our vans around town and had seen me on television, realized the 8,000-kilometre mark was a pretty big deal for our team, so she picked up the phone and called her baker, who had already finished his shift and gone home. She asked if he would come back and bake just one more cake. “You know that guy who’s walking across Canada,” she said. “Well, he’s here in Hope. He’s walked 8,000 kilometres and they need a cake, so can you come in and make it?”

There was a pause and then the shop owner held the phone away from her ear and said to our road manager, “What colour do you want?” No one cared about colour; they were just happy to have a cake. The next question was, “What do you want it to say?” That remained a surprise for a couple of hours.

That night when we returned to our motel after a dinner meeting where I spoke to the Lions, Rotarians and members of the Hope Chamber of Commerce, I was called to a gathering on the motorhome. What I thought was going to be another routine briefing about departure times, road schedules for volunteers and police escort confirmation turned out to be a surprise party. The smiles on the faces of the road team told me they had pulled one over on me! There in the middle of the motor home kitchen table was a huge white cake trimmed with blue, green and yellow icing. On the top of the cake it said,  “8,001 And Beyond Hope!”

I don’t have words for how I felt when I looked at the smiling faces of the road crew and volunteers on board the motor home at that very moment. I had been with these people for almost a year and we had shared some incredible times.

There was a bit of nostalgia as I looked around at all the familiar things on the motor home itself. We had become very attached to the vehicle we called “The Mother Ship.” (It’s amazing how we feel an attachment to vehicles. My wife calls her little car ‘Zippy’ and before that she had ‘Peppy.’ I think she almost shed a tear when it was time to part with Peppy.’)

The “Mother Ship” has served us in so many ways.  It has been our command centre for communications, our  motel, laundry facility, snack bar, hospital, restaurant and rest stop. For the people who came from all walks of life to pitch in and do whatever had to be done—laundry, dishes, driving the vans and collecting money, the motor home was the hub. There were no egos onboard the motor home or on the road. It didn’t matter if you were the CEO of a Fortune 500 company or a clerk in a grocery store. Out here, everyone was equal, and through the good times and the bad, everyone had stayed focused on the reason we were here.

t was going to be even harder to say goodbye those people I had spent the past ten months with. We had become a very tight family. But when I thought about Jesse, and I held that picture in mind of Jesse receiving the Order of Ontario, I knew it was time to go home—home to where I was needed.

This was also the week that Bevin Palmateer, our advance man, finally fulfilled his promise to join me on the road for a full day of 33 kilometres. It poured all day long. And I mean – it poured! Radio stations in the area noted that we had received more than 40 millimetres of rain by 2:30 in the afternoon. That’s more than two inches of rain.

As we finished our day on the road together, we sloshed our way through a long uphill climb, and in the rain at the top of the hill, there were people who had stopped to fill their jugs with water from a natural spring. The last thing you would think we wanted to see was more water. A couple who had stopped to fill their jugs made a generous donation. And then, as we stood there soaking wet, we lifted our styrofoam cups full of clear spring water, and the four of us toasted Bevin and his day on the road.

Back on the motor home there were running shoes drying in front of every available vent and socks, shirts, pants and jackets hanging from a criss-cross of makeshift clothes lines. And. As always—our motor home driver Ed Coxworthy was standing at the ready with a hot cup of tea.

The following morning, after what seemed like an eternity of dull, grey, wet days, as we met our RCMP police escort—the sun was finally shining.

PS:  As our days are dwindling down to a precious few, I thought you might want to see what a bit of our grocery list looked like.

What It Takes To Walk Across Canada

3 bottles of cinnamon (popular on porridge) 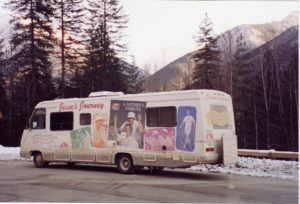 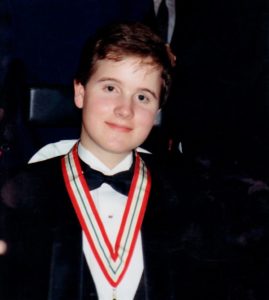 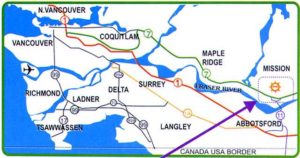 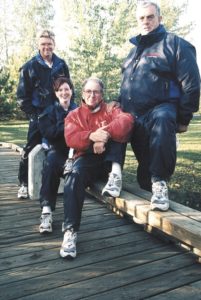