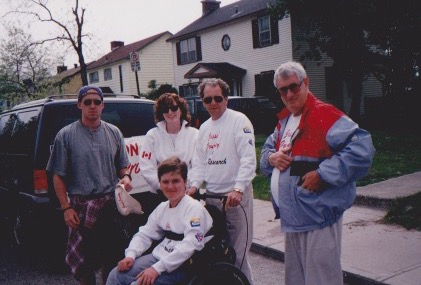 Our morning started at Glen Morris Road, west of Cambridge and we made good time getting into Cambridge, but unfortunately very few people seem to know about us. This is the struggle we are going to face the same as everyone faces when they are working to introduce something new. Jesse knows we are in this for the long haul.

For the road crew, Manager Trish Federkow, and Jesse’s helper Sean Bagshaw (Ed’s note: Sean, who was nicknamed ‘Bagger’ is now Dr. Sean Bagshaw and he and his wife Heather live in Edmonton with their two children) and our driver Mike Woodward, it’s going to be another day of shuffling people around and getting everybody to the right place at the right time.

The Big “V” drugstore people offer us lots of drinks and give us a cheque for $600. We push on and stop for lunch at a park near the Knotty Pine Restaurant. Julie Simpson and Glenda Cumming, more friends from the television family in London, bring us sandwiches and cookies along with chocolate cake. I’m a lucky dad. I push Jesse up the hill towards highways 8 and 401. Bob Smith and Ron Schistad want to get some final shots. From here we head into Kitchener where there are girls with flags who are part of a marching band that escorts us to City Hall. The mayor greets us and gives Jesse a replica of a Conestoga wagon. The most amazing thing is a woman, whose name is Mrs. Davidson (not related to us) presents Jesse with a custom handmade blanket. This is very thoughtful. From Kitchener, it’s on to Waterloo and a similar ceremony before we head into Toronto for an appearance at the Blue Jays game at the Skydome. (Later in the year, Jesse and I would be back in Toronto and hearing the pipes and drums of the 48th highlanders as we dropped the puck on opening night at Maple Leaf Gardens.The video link is at the bottom of this posting.)

Our volunteers have worked hard to make this a memorable night and a great opportunity for people to recognize Jesse’s Journey and what Jesse is doing to help move research forward for kids just like him. As I push Jesse around the bases at Skydome, Jesse’s message of courage and determination is playing on the video-tron in centre field. Jesse does a number of television interviews and meets actor Lou Gossett Junior and the Blue Jays give Jesse a signed baseball, before we are taken upstairs to join broadcasters Jerry Howarth and Tom Cheek. Before heading back to Guelph, where we will spend the night, Jesse and I thanked all the volunteers who made the day a success (Gary, Dean, Nick, Kate, Jennifer, Terry and Sherene were all with us today and my apology to anyone I forgot. Some days it’s just all too much to take in.) All these people worked very hard today. Jesse works hard every day. 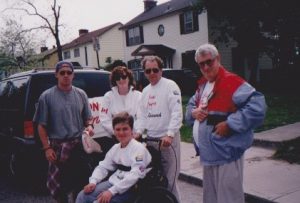 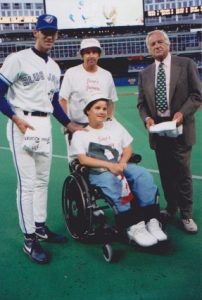